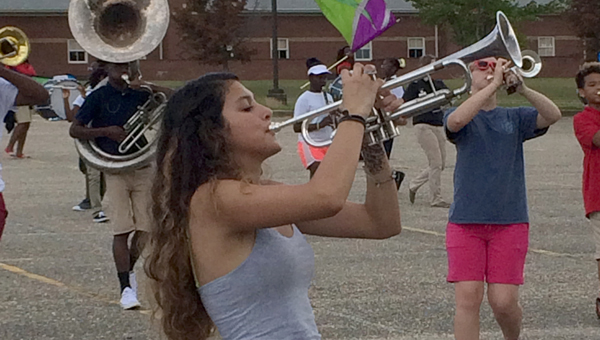 Senior trumpet player Jennyfer Maciel and the Greenville High School Tiger Pride Marching fine-tune their halftime show, which will feature calypso and Caribbean music selections as well as some popular favorites like “Jump in the Line.” The band will perform the show during halftime of the Tigers’ season-opening contest with Valley on Aug. 28. (Advocate Staff/Andy Brown)

The Greenville High School marching band will bring the sounds of the islands to Tiger Stadium this fall.

Brett Johnson, band director at GHS, is excited to unveil a new kind of halftime show – one he’s never seen the likes of before.

The theme for this year will be Calypso/Carnival and will feature calypso and Caribbean music selections as well as some popular favorites like “Jump in the Line.”

“It’s a party from the beginning to the ending of the show,” Johnson said. “I personally have never seen a show like this. It’s something that’s out there a little bit, but I hope that the community will enjoy it because the kids are really enjoying it.”

The Calypso/Carnival theme will incorporate much of the fun and adventure of Mardi Gras, as well as salsa and merengue dancing. During the show, the band members will participate in a limbo segment, a conga line and the majorettes will have the chance to twirl with fire.

Johnson decided on the theme after considering the many types of marching band shows he has seen in his lifetime. He wanted this year to not only be memorable for the crowd, but also to be fun for the students.

It is his hope that this year will help broaden the horizons of the students and get them interested in music from other cultures.

Since last year, the band’s numbers have increased by about 20-30 students. Johnson hopes that the numbers will continue to increase each year as students continue to see the excitement of music.

“We’re doing a lot more things and being more visible in the community. I think that’s why our numbers have jumped. It’s going to be an amazing season,” said Johnson.

The band has also made a change to the auxiliary section this year with the addition of a dance team. The dance team will be part of the marching band, just as the majorettes are, and in the spring they will serve as halftime and sideline entertainment for basketball games.

Fans will have the chance to see the new halftime show Aug. 28 when Greenville High School plays host to Valley High School in its season opener. Kickoff is set for 7 p.m. at Tiger Stadium.

On Wednesday crews began demolishing the first of three downtown buildings purchased by the City of Greenville earlier this summer.... read more