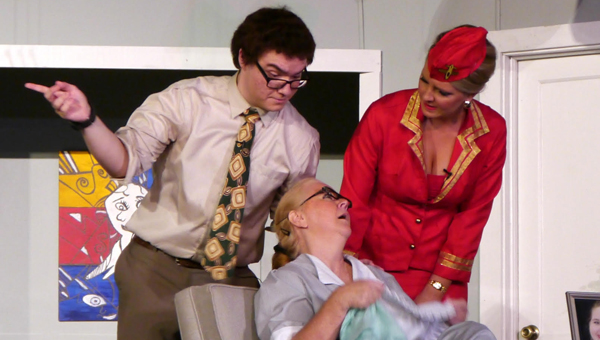 Last Friday night, the audience at Greenville’s Ritz Theatre accepted the invitation to “come fly with me” as the Tony Award-winning play “Boeing Boeing” jetted into the Camellia City.

The Greenville Community Theatre’s production served up plenty of giggles and guffaws as a bachelor and his buddy learn three flight attendant fiancées are two too many.

GCT’s Harriett Foshee, who assisted with the box office, said she was delighted by all the positive feedback coming from audience members.

“I think this might just be the best show the Greenville Community Theatre has produced so far,” Foshee said.

“There is always a sense of accomplishment after the first night of any show,” said Bell, a veteran of three GCT productions and a familiar face in “Putting on the Ritz” and “Christmas at the Ritz” for the past four years.

“We work so hard for months learning lines and blocking and developing our characters. It brings us a real sense of pride to finally be able to share it with the audience,” Bell continued. “No matter how many times I am on stage, I always get butterflies in my stomach on that first night. There’s nothing else quite like it.”

Ansley admits that it is no walk in the park to put on a show of the caliber of “Boeing Boeing.”

“There were many times during the process that you wonder if everything is going to come together, but there are things you look for that make you know that you are going to be successful. One rehearsal builds upon the previous one,” he said.

“During that first show, I was beaming with pride because I knew that they were nailing it and everything was falling into place. And afterwards, I was very satisfied with the execution of the show, actors, crew and audience reaction.”

Bell says being surrounded by understanding and helpful folks at home enhances the whole community theater experience for her.

“It is always hard trying to juggle everything at home and prepare for a role, but I am blessed to have a wonderful family who supports me and encourages me,” Bell said.

“I try my best to be mama and wife during the day and study lines at night when everyone is sleeping. But more times than not, my children are helping me run lines and work on blocking. Levi and Madelyn ran lines with me almost every day this summer trying to help me prepare for the role of Gloria.”

With only six cast members there were “lots of lines to learn and plenty of blocking.” Tweaking and fine-tuning of the production took place all the way up to opening night, Ansley said.

“I was concerned for the cast members and whether or not they actually had the time to get their parts done, but they came through beautifully,” he said with pride.

The easiest aspect of it all, the director says, is the cooperation he received from cast and crew along the way.

“Anything I asked of anyone, they did it, without question. And my assistant director, Lori Neilson, is undoubtedly the blocking queen,” Ansley said.

“My strengths are in artistic vision, organization and execution. Lori’s strengths also happen to include excellent blocking and stage direction skills. I definitely would not have wanted to do the show without her. When I pick up the torch and run with it again, I hope she is there with me.”

Bell says she makes her community theater experiences a family affair by having her children Levi and Madelyn join her at rehearsals.

“They love coming with me and seeing how a show, whether it’s a GCT production or Putting on the Ritz, is put together,” she said.

Ansley would love to see more parents like Bell getting involved and getting their children involved in the arts in their local communities.

“It is a struggle to get people to support the arts these days—not only here in Greenville, but all over,” he said.

“The arts are important. People need to stop and realize that what we are doing on this stage makes our world a better place now and for future generations. Live theater is able to stimulate and broaden our minds and inspire our creativity in a way that all the high-tech devices in the world will never be able to do, no matter how advanced they become.”

Ansley expressed his appreciation for all the businesses and citizens who supported the latest GCT production.

“To everyone who promoted our show, sold tickets, donated or loaned materials, provided rehearsal facilities and/or supported it with their attendance, thank you so much,” he said.

As for Bell, she is already looking forward to next spring and another chance to share the Camellia City’s community theater experience with her children.

“You can definitely look for me in the 10th anniversary show of Putting on the Ritz. I wouldn’t miss it for the world,” she said with a smile.

The GCT’s production of “Boeing Boeing” was presented by special arrangement with Samuel French, Inc.