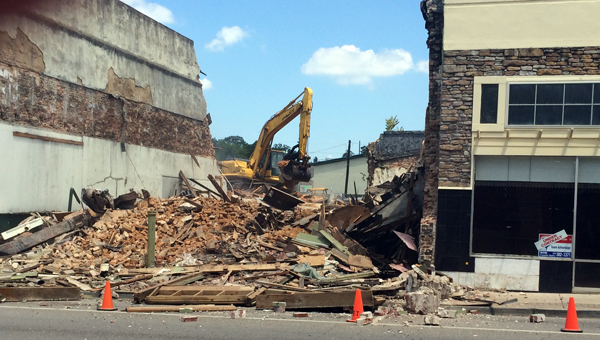 On Wednesday crews began demolishing the first of three downtown buildings purchased by the City of Greenville earlier this summer. (Advocate Staff/Andy Brown)

The landscape along Commerce Street has a new look.

On Wednesday crews began demolishing a pair of buildings purchased earlier this summer by the City of Greenville.

Greenville Mayor Dexter McLendon said all three buildings had deteriorated beyond repair and posed a safety hazard to the public.

The city paid approximately $20,000 for the two buildings that were torn down Wednesday. Crews were still working Friday to remove the rubble.

“We started out just trying to do the old farm supply building, but they are sort of connected, and we ended up having to buy both, because when we start tearing one down, we’re going to pull the other one down too,” McLendon said.

McLendon said the space will also free up more room for parking.

“We’re seeing more and more people downtown, and we need more parking,” he said. “We’re going to try and really fix it up with money from next year’s budget.”