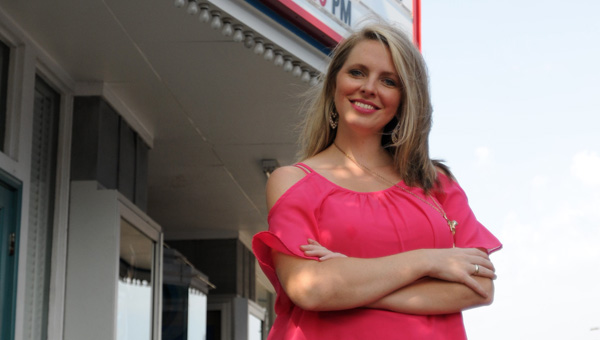 Alaina’ Norman will make her theatrical debut Friday night as part of the cast of the Greenville Community Theatre’s production of “Boeing Boeing” The show will begin at 7:30 p.m. There will also be a performance Aug. 15 at 7:30 p.m. (Advocate Staff/Andy Brown)

It’s time again to welcome to the stage the Greenville Community Theatre and with it, some new faces to the thespian world.

And while the Butler County native is eager to stage the show, she very nearly passed on the opportunity. When approached by director Jimmy Ansley, Norman made it clear that she didn’t speak in front of people, much less act.  Ansley didn’t take no for an answer and convinced Norman to audition for the show.

“Last year I was actually going to audition, but I chickened out. So, I thought about it and said why not? If I didn’t like it, I didn’t have to do it,” she said.

In order to prepare for her role, Norman watched multiple YouTube videos and tutorials to help master the Italian accent. Norman admits that the process was not an easy one, but the encouragement she received from her cast members made it run more smoothly.

Norman credits her success to not only her cast members, but to her family and the residents of Country Place Senior Living. Without the help and support of these groups, Norman believes she could not have been successful.

“It’s been so challenging and rewarding, and it’s something that I have tried to teach my children every day. Do something that you’ve never done and to try something new. It doesn’t matter if you’re scared of it, you might just try it and like it,” said Norman.

Norman and the rest of the cast have been putting in long hours preparing for the play, which tells the story of an American playboy Bernard Lawrence and how he has cleverly designed a system using the airline timetables to keep going three affairs with flight stewardesses.

However, his life soon starts to descend into shambles after the arrival of a friend, Robert Reed, and a dreaded change to the flight order, makes it increasingly difficult to keep his three fiancées apart.

“I think it’s a really good play. I think anybody that knows anything about theater will be drawn out,” said Norman.

The show will open Friday at 7:30 p.m. at the Ritz Theatre. There will also be a 7:30 p.m. performance on Aug. 15. Tickets are available at McFerrin’s Jewelry, The Pineapple, and The Medicine Shoppe. The cost if $20 for adults and $10 for students.

L.V. Stabler Memorial Hospital is one of 38 hospitals that will become a part of Quorum Health Corporation. The transaction... read more