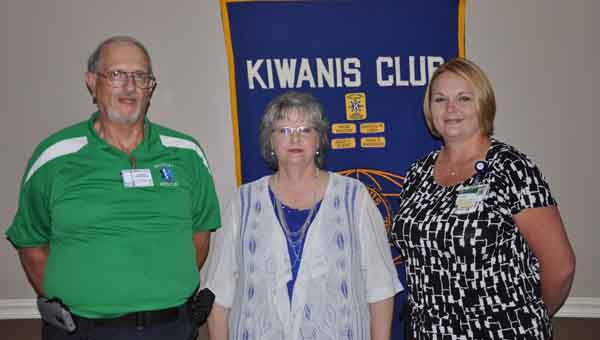 From left, Wayne and Sue Blackmon and Karen Hutto encourage everyone to become organ donors.

Sue and Wayne Blackmon of Brantley, have had “Organ Donor” on their drivers licenses for years, but never expected to be on the recipient side of any donor list.

That is where they found themselves in 2013.

Sue shared her and her husband’s experience at a recent Kiwanis Club meeting to encourage others to help by becoming organ donors.

She said they learned of Wayne’s liver disease in April and he underwent treatments until November when his doctor informed them that there was nothing more he could do. The next step was to go to UAB for the three-day transplant evaluation.

On November 4, the first day of the evaluation, Wayne was placed on the list, but was told that it could be years before he received a liver.

On November 6, the doctors told them that he had cancer in his liver. That pushed him up much closer to the top of the list but they were told it still could be a very long time.

But on November 23, only 17 days later, they received the call to get to UAB for the liver transplant.

“We were aware of God’s hand throughout our experience,” Sue said. “If Wayne had not experienced the symptoms when he did, the cancer would have been large enough to exclude him from the transplant list.”

They were told that the liver was given to him because he was the only patient on the list that it would fit because it was very large.

Because of these blessings, he was spared the cancer treatments, years of diminishing health and most of the tribulations others have seen.

Wayne has served Crenshaw County as a volunteer Paramedic for almost 50 years with Brantley Fire and Rescue, much of that time as Captain.. Sue told him that he must have been spared because his work isn’t over and there are others whose health and lives will depend on him being here to be God’s hands.

Also on hand, was Karen Hutto, an organ transplant coordinator with the Alabama Organ Center. She has been with the center for more than seven years.

“It’s really great to know that what you do is truly going to save someone’s life,” she said. “We don’t get to here the recipients side of the story. Unfortunately, the Blackmon’s story is very different than most.”

The organization covers the entire state of Alabama and is one of only 58 such centers in the country. In addition to organs, the center coordinates tissue recovery, blood vessels and cornea donations.

“There are so many hands that go into what we do. It’s truly a miracle when everything lines up,” she said. “Ninety percent of organs recovered in Alabama go back to someone in Alabama.”

Alabama also has an organ donation center for children and one run by Veterans Affairs.

“We have the longest kidney transplant list in the country,” Hutto said.

Alabama’s poor health and diet contributes to the statistic. Diabetes, hypertension and heart problems can lead to a failing kidney.

For those who have decided to be an organ donor, Hutto recommended explaining the decision to loved ones so that it comes as no surprise at your time of death. Donors do not have to be young or in perfect health to have viable organs after death.

Hutto also recommended having an advance directive in place so that loved ones would know whether or not to take extraordinary measures to preserve your life.

Organ and tissue donations only occur after all efforts to save a life have been exhausted and a doctor has certified the death.

That donation could add decades to the life of an ailing Alabamian.

“We’re seeing people living 20 or 30 years after a transplant,” Hutto said. “It’s truly the greatest gift someone can give.”

For additional information, go to alabamaorgancenter.org.