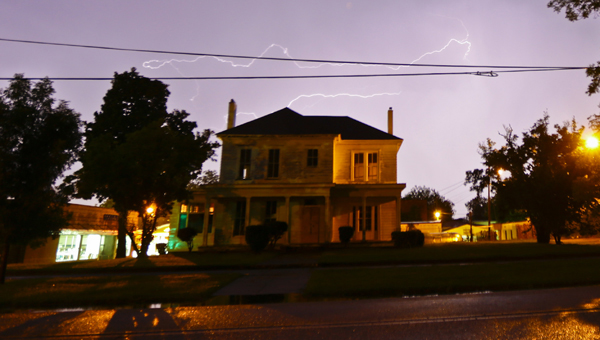 BOONE NEWSPAPER SERVICE PHOTO | ALAINA DENEAN DESHAZO
Three people have died in Alabama this year due to lightning, which is the most in the nation.

Alabama is one of the most deadly states when it comes to being struck by lightning.

Three people have died in Alabama from being struck by lighting in the last couple of weeks. An Opp couple died June 23 while they were outside covering their chickens, and a 12-year-old girl died in Fort Morgan July 5 while on the beach.

According to the National Oceanic and Atmospheric Administration (NOAA), an estimated 50 people die in the United States each year from lightning. So far, 17 people have died in 2015 with Alabama and Florida topping the list with three apiece. Those 17 deaths have happened since April 9 and most happened during an outdoor leisure activity like fishing, walking and hiking.

Data from NOAA shows that 322 people died in the United States due to lightning from 2005 to 2014. Florida accounted for the majority of those with 47, and Alabama accounted for 10 deaths during that time.

“There are millions of lightning strikes that occur across the country every year. Does that mean you will get struck? No,” said meteorologist Jim Stefkovich. “But if you remain outdoors during leisure activities, where two-thirds of people that are struck are, you are greatly increasing your odds of being struck”

Stefkovich said a lot of people have the misconception that if they can’t see lighting they are safe.

“What people have to surmise is that if you are hearing thunder, the lightning is probably a lot closer than you think because sound travels at a lot less distance than the lightning itself,” Stefkovich said.

“So if you are hearing thunder, the lightning is relatively close, and the next bolt could be right on top of you even if you can’t see it, even if it is in the distance.”

Stefkovich said if people are outside while it is storming they should get inside a building or a vehicle as quickly as possible.

“We recommend that people always try to get inside of a sturdy building or in a vehicle. Just don’t touch any metal parts in the vehicle,” Stefkovich said. “Unless you have an older car there aren’t a lot of metal parts in vehicles.”

NOAA used to recommend people use the crouch method, which encouraged people to crouch down during a storm, but research has shown that is doesn’t provide safety from lightning.

“We really recommend that when thunder roars, go indoors because thunder is a byproduct of lightning. If you are hearing thunder, then it is being produced by lightning, which means lightning is close by,” Stefkovich said.

NOAA advises people to have a lightning safety plan, postpone activities, monitor the weather and get to a safe place during a thunderstorm.

They also advise people to use cordless phones and to keep away from electrical equipment, wiring and plumbing.

Only 15 veteran applications have been received for this year’s Covington Region Honor Flight and there is room for nearly... read more