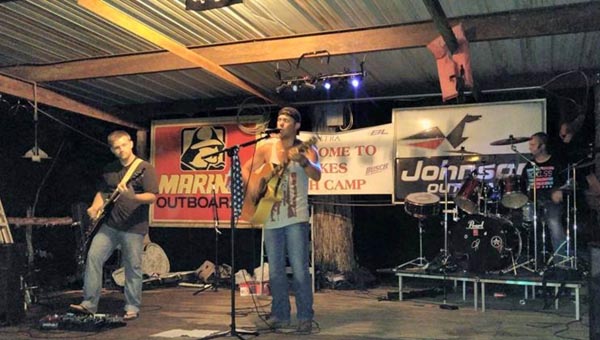 South Bound will perform at the Pepsi Pavilion on Saturday, Aug. 1.

Local band South Bound will be first to take the Pepsi Pavilion Stage for its grand opening Saturday, Aug. 1. The free concert starts at 5:45 p.m.

“We’re looking forward to being the first ones to perform there and hope to get this off to a good start,” said South Bound drummer Jonathan Smith. “It was something I’d mentioned about a year or two ago and was hoping Luverne could get something like this going, but was told it wasn’t possible.”

The Downtown Merchants Association, in conjunction with the Crenshaw County Chamber of Commerce and Luverne Pepsi Bottling Company, transformed the pavilion into an entertainment venue. The space now includes a stage, lighting, murals, landscaping and a few tables and chairs.

“We only have seating for 14 and I hope we have more than that,” Mitchell said.

In addition to Smith, the band includes Matt Holmes on rhythm guitar and lead vocals and Grant Carr on lead guitar.

The pavilion’s grand opening will start long before South Bound takes the stage. As part of Main Street Market, a farmer’s market will be set up in the space.

Main Street Market will bring arts, crafts, produce, homemade jams and salsas to downtown Luverne on the first Saturday of each month. The market officially opens at 10 a.m.