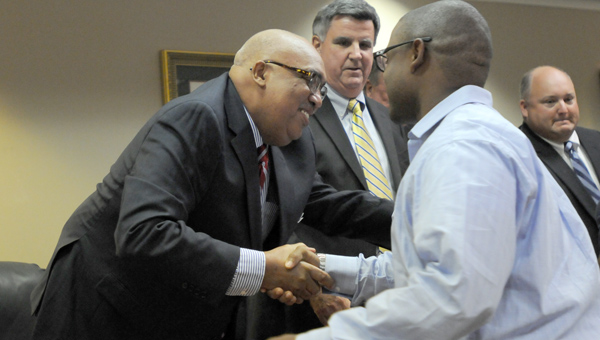 Jimmy Lawson, left, is congratulated on his appointment to the Greenville City Council. Lawson will fill the seat of longtime Councilman James Lewis, who passed away July 5. (Advocate Staff/Andy Brown)

Jimmy Lawson was appointed to fill the vacant Greenville City Council seat of longtime Councilman James Lewis, who died July 5 at the age of 82.

Lawson, who will represent District 4, was sworn in at Greenville City Hall during Monday night’s city council meeting.

“It’s an honor to come behind an individual like Mr. Lewis,” Lawson said. “He worked so hard, and his shoes are big shoes to fill. I’m looking forward to filling those shoes in the best way that I can and continue to make Greenville the best place that I can.”

Lawson, a U.S. Army veteran who received the Purple Heart and served in the Vietnam War, is a former commander of the American Legion Post #24.

He is also the owner of Lawson’s Body Shop, which he opened in 1990.

Greenville Mayor Dexter McLendon said that it was Lawson’s character and his experience as a businessman that made him the right choice to fill the District 4 seat.

“My daddy managed the Piggly Wiggly for about 25 or 28 years or so, and he told me a long time ago, that Mr. Lawson was a good man,” McLendon said. “I never have ever forgotten that. We feel like we’ve got a good businessman to be a part of this council and we’re excited about him being part of it.”

Lawson said he plans to build on the foundation that Lewis, who served on the city council for more than three decades, has built.

“One of Mr. Lewis’ things was not only keeping Greenville clean, but District 4 clean. That’s going to be one of my priorities,” Lawson said.

During his tenure, Lewis worked to secure grants that helped improve housing in District 4, spearheaded an effort to have more than 500 feet of ditch in District 4 filled in and helped get Dunbar Recreation Center air conditioning.

He was also instrumental in helping Greenville attract a number of businesses to the area, including Hwashin America, Hyundai Steel (Hysco America), CorStone Industries, Ozark Materials and Super Walmart.

The city council recognized Lewis’ service during Monday night’s council meeting by presenting members of his family with a proclamation that highlighted the contributions Lewis made to the City of Greenville during his time in office.

“My dad had three passions — God, family and Greenville,” said Sedgwick Keith Lewis. “I think this is just a culmination of all of that. On behalf of my family, those here, those not here, we really appreciate this, and we’ll always have Greenville in our hearts.”

Following the presentation, Cedric Lewis congratulated Lawson on his appointment and asked that he “serve well and preserve (Lewis’) legacy.”

Lawson will serve out the remainder of Lewis’ term, which expires in November of 2016.

“Mr. Lewis is going to be missed. We all understand that, but we feel like we have a great man in Mr. Lawson to be a part of our city council,” McLendon said.