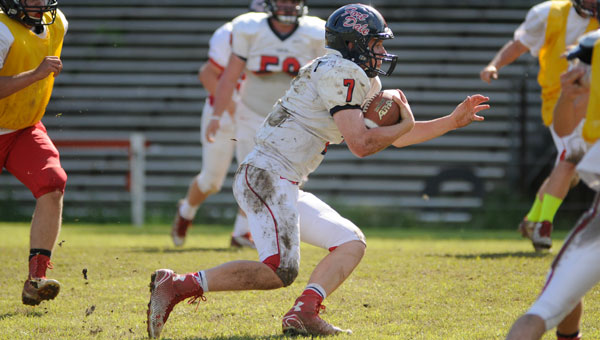 The 2014 football season was a standout year in Fort Dale Academy’s history, though not for the best of reasons.

It marked the first time since 1999 that the Eagles’ season ended without a trip to the playoffs.

But FDA will receive another shot at the playoffs and redemption this fall against an identical schedule of opponents.

The Eagles travel for their first game of the regular season to Evangel Christian Academy on Friday, Aug. 28, for a non-area game.

The team will stay on the road for Week 2 against its first area opponent, Autauga Academy, on Sept. 4.

The inaugural home game of the season will feature Escambia Academy on Sept. 11, with Wilcox Academy following at home on Sept. 18.

The three-game stretch against Autauga Academy, Escambia Academy and Wilcox Academy served as a tough test early in the year for the Eagles during the 2014 season.

The Eagles hit the road once again for Weeks 5 and 6 against Sparta Academy and Hooper Academy on Sept. 25 and Oct. 2, respectively.

Three consecutive area games round out the remainder of the schedule with Monroe Academy at home on Oct. 9, Morgan Academy on the road on Oct. 16 and Pike Liberal Arts at home on Oct. 23.

Perhaps the toughest test of all is saved for last, as Fort Dale Academy braces to square off again with Edgewood Academy.

Edgewood went undefeated in 2014, and the Wildcats capped off an already impressive season with a convincing 55-25 championship game win over Marengo Academy.

The Eagles will face the Wildcats in the final game of the season at home on Oct. 30.