Downtown clock back in place 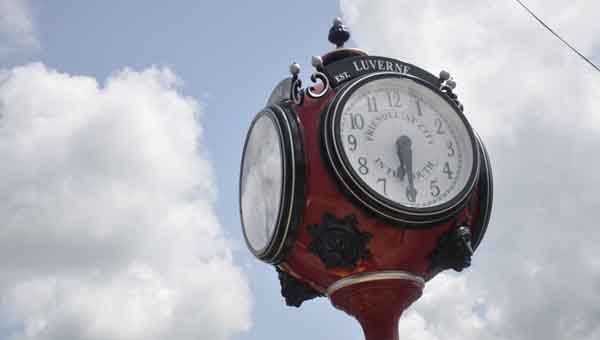 Luverne’s clock is back on its corner at Fifth Street and Forest Avenue. The clock was taken down and shipped to be repaired last fall.

The process was stalled when the Mayor Joe Sport saw how large and heavy the clock was. He estimated it at about 400 pounds.

“I didn’t realize how big that thing was until we got it off the ground,” he said.

Because the warranty had expired, Sport wanted to get an estimate on the costs to repair the clock before shipping it to Verdin Bells and Clocks in Ohio.

“We’ve got to build a shipping crate for that thing,” Sport reported during a City Council meeting.

The city was spared the expense of shipping the heavy clock. SMART Alabama offered to ship it.

The city was also spared the $6,000 price tag to fix it. Crenshaw County Chamber’s economic development board came up with the funds.

Verdin found a crack at the top of the clock that had allowed water to seep in and ruin the clock’s computer. The company rebuilt the exterior and replaced the broken parts.

Once repaired, the clock sat at SMART until a service operator from Verdin could come to Luverne and supervise the installation.