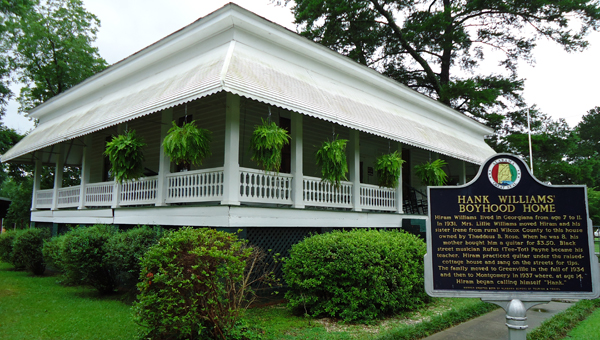 A piece of history was stolen from the Hank Williams Sr. Boyhood Home and Museum.

According to museum curator Margaret Gaston, a black and white poster printed in the 1940s that was used by MGM to advertise a number of Williams’ songs was taken right out of the front door of the museum, which is located on Rose Street in Georgiana.

“It was discovered on Monday when I opened.,” she said. “The screen door latch was forced open, the glass panel in the wooden door was broken, the night latch and a sliding bar latch opened.”

The poster, which measured 24 inches by 36 inches, hung on a wall in the first room of the house.

“I looked at that poster everyday when I was at work.” Gaston said. “The advertisement had one of Hank’s oldest songs on it, ‘My Son Calls Another Man Daddy.’”

Gaston said she believes someone broke into the museum on June 7 and snatched the poster, which the museum has had for more than a decade. June 7 was the final day of the 36th annual Hank Williams Festival.

During the festival, admission to the museum was free on Saturday to anyone who paid to enter the festival.

“At least a couple of hundred people toured the museum on Saturday,” Gaston said.

The Georgiana Police Department is investigating, and Gaston said investigators were able to collect evidence from the scene.

Johnson Furniture held its soft opening on Wednesday. Pictured are, from left to right, Joyce Till, Myrlean Hitson and Betty... read more