Tate: Marriage licenses will not be issued for at least 25 days 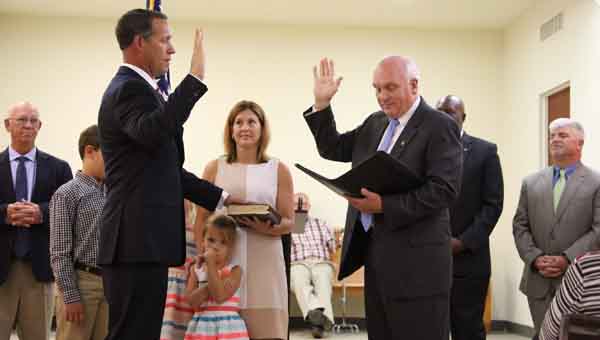 CONTRIBUTED PHOTO
Surrounded by family, Will Tate is sworn in as Crenshaw County probate judge by Jim Perdue Tuesday morning,

Taking office within days of the U.S. Supreme Court’s decision on gay marriage, Tate had to hit the ground running. He said he would issue no marriage licenses for 25 days from the date of the court opinion.

“The legal process allows 25 days from the date of the Supreme Court’s decision to file legal pleadings regarding the decision. Title 30-1-9, Code of Alabama, grants discretionary authority to probate judges regarding the issuance of marriage licenses,” he said. “During this time, I will continue to seek legal and spiritual counsel, and I will make a further statement at the appropriate time.”

As a deacon and Sunday school teacher at South Luverne Baptist Church, Tate’s plan of action was ruled by a higher power.

“Marriage has already been defined by God as the joining of a man and woman. Marriage between a man and woman was the first institution He blessed—before there was a government, before there were laws,” Tate said. “Justices on the United States Supreme Court have rendered a majority opinion of the definition of marriage impacting America. God’s definition has not changed, and I agree with God.”

Tate said he has had an interest in public service for many years and was more than happy to take on the duties of probate judge.

Perdue said he was not involved in Tate’s appointment but was pleased with Gov. Robert Bentley’s choice.

“I think Will’s a fine young man,” he said. “A good solid Christian. He’ll do great.”

Tate, 41, holds a degree in land surveying from East Tennessee State University. He is a professional land surveyor, licensed in Alabama and Florida. He is also a certified bridge inspector for Alabama.

Tate has served as a member of the board of directors for Beacon Children’s Hospital.

In addition to deacon and Sunday school teacher, Tate is a lay speaker, providing pulpit supply in various Crenshaw and Butler county churches.

“I believe God has a purpose and a plan for everyone. God has placed within my heart the desire to help others,” Tate said. “I thank God that His plan allowed me this opportunity.”

Schools to get fine arts academies