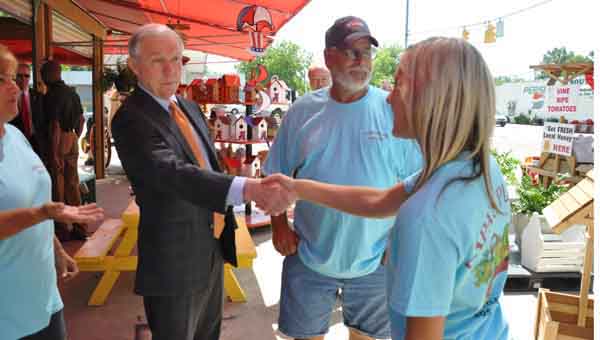 U.S. Sen. Jeff Sessions spent Wednesday morning in the town of Brantley. During his visit, he spoke with the owners of Godwin Tires, Brantley Bank and Trust and Papa’s Market. He also got to meet employees and sit down and talk with locals.

“I really feel that some of the best people come out of small towns,” said Sessions. “Brantley is one of the best towns in Alabama.”

The first stop on Session’s visit was to Brantley Methodist Church, where state Rep. Chris Sells introduced him. Sells and Sessions honored the Brantley High School softball team on their state championship.

“It’s great to be with the girls softball team,” said Sessions. “To win two state championships is a big deal.”

After congratulating the team, Sessions talked about his ideals for the education system in Alabama and other issues affecting the town.

“It’s always helpful to talk to people to find out what their problems are,” said Sessions. “Often the federal government is causing more problems than good.”

Local community members felt it was important that Sessions came to Brantley and interacted with the people.

Dozens of locals came to Papa’s Market and the Brantley Methodist Church to see the senator and take a picture.

“I’m glad to see he is out visiting the community,” said James Hollis CEO of Brantley Bank and Trust.

Sessions finished up his tour of Brantley around 11 a.m. and will continue his city tour of Alabama.