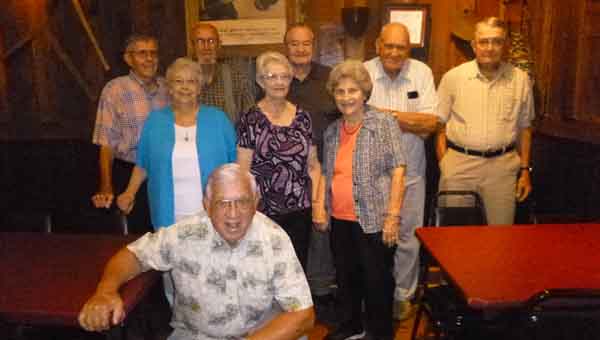 This was their 26th year of having annual reunions.

The classmates began to arrive on the front porch of the “Old Barn” restaurant in Goshen at 10:30 a.m.

The class of 1949 holds a close friendship that still lingers in their hearts, which was very evident with the hugs, handshakes and greetings shared as they gathered. They shared memories and information about other classmates who weren’t able to attend.

After being seated in the dining area Larry Cauthen welcomed everyone and shared news from the ones who were unable to attend. He encouraged everyone to contact the ones that were absent and invite them to please mark their calendars for the second Saturday in June of 2016, June 11, for their next reunion.

Conversation during fellowship was of old times and memories held at LHS. Some even told of their families.

There were a few who talked about their ailments, realizing they are the old folks now. However, they were in agreement about how blessed they were that they were still able to drive.

Taylor gave the blessing on the meal ordered from the wide variety of foods from the menu.

Food, fun and fellowship were enjoyed by all and many said they were looking forward to the 2016 reunion.