Recruitment of Airbus suppliers takes off 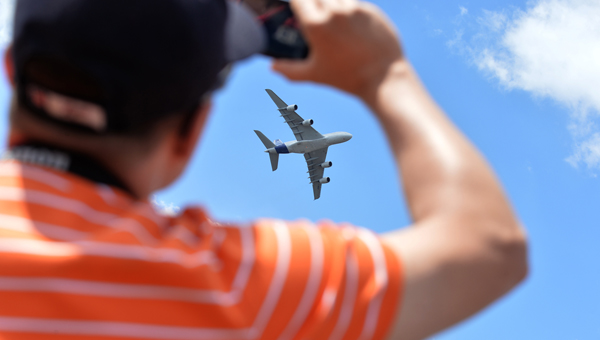 An Airbus A380 performs its flight demonstration during the International Paris Air Show. Greenville Mayor Dexter McLendon was part of the Southeast Alabama Gas District delegation that attended the show in hopes of luring Airbus suppliers to the area. (PHOTO BY P. PIGEYNE/COURTESY OF AIRBUS)

A recent trip by Greenville Mayor Dexter McLendon sent a clear message to aerospace companies about the Camellia City and Butler County.

McLendon, who also serves as the chairman for the Southeast Alabama Gas District (SEAGD), attended last week’s International Paris Air Show, the world’s largest and longest-running aerospace trade show. The trip was paid for by SEAGD, and while McLendon was on hand to represent the natural gas company, he took the opportunity to let many of the more than 2,200 businesses that took part in the event know about Greenville and Butler County.

“We wanted to make sure they know we’re open for business,” McLendon said.

With Airbus — one of the world’s leading aircraft manufactures — set to begin production at its Mobile, Ala., facility in July, McLendon said this was the perfect opportunity to begin cultivating relationships with companies that could serve as suppliers for the company.

The Mobile facility, which will house the company’s first final assembly line on U.S. soil, is expected to deliver its first aircraft in 2016, according to company officials.

“This was the perfect year to be able to go,” McLendon said. “I might put something in the (city’s) budget to go back next year just because I think it’s that important. It’s where everyone is meeting.”

McLendon said he had 25 to 30 contacts that he plans to follow up with in the coming weeks by sending them a letter and some information on the area.

“It’s really important for us to get our message out there, which is we have a great, great location and we have a workforce,” he said.

While McLendon would certainly welcome any interested suppliers to the Camellia City, he said that the south end of Butler County may be the most logical location for a company to locate.

“It’s my opinion that the south part of the county would be a great place for some of these industries because of its proximity to Mobile,” he said. “In an hour and a half you can be in Mobile. I would love to see Conecuh County and Butler County come together on the Interstate and have a site that we pick out that would work for one of these companies.”

Airbus’ $600 million investment in its Mobile facility will create 1,000 jobs on the assembly line at the plant, but in reality will create many more jobs around the state. Airbus spending in the U.S. already accounts for 245,000 jobs.

McLendon wants to make sure that as that number grows, Greenville and Butler County are among those that benefit.

“It’s all about getting more jobs,” he said. “I believe that we are in the perfect location with Hyundai being right up the road and Airbus being down the road that will allow us in the next five to 10 years to see a lot of changes in this area’s jobs. But you can’t sit here and wait for people to come to you. You have to go where they are, and that’s why we were at the Paris Air Show.”

And while McLendon called the trip a success, he knows it will be a while before anyone knows just how successful it was.

“Everyone wants to know when it’s going to happen,” he said. “Nothing like this happens quickly. It moves very slowly. I’m not really known for my patience, but with something like this you have to be patient. We made a lot of contacts that we’re going to follow up with. You never know what can come of that. You build these relationships, and they may mention one thing that makes a difference in your city or county getting one of these businesses. I can tell you this. We’re going to do all we can to make them aware of what we have to offer.”