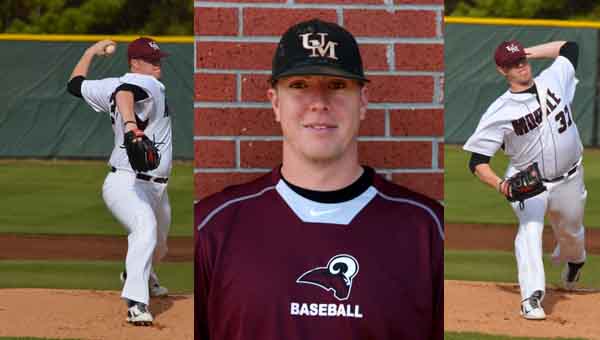 University of Mobile pitcher and Luverne alum Corey Hale is heading to Arizona to play with the San Diego Padres.
SUBMITTED PHOTOS

Corey Hale, the left-handed pitcher from Luverne, was drafted last week by the San Diego Padres.

Hale was selected 12th in the 28th round of this year’s Major League Baseball Draft, making him the 837th overall draft pick.

“It feels awesome,” said Hale, “It’s what I’ve worked for my whole life. The reason every kid plays the game is to get to this point.”

Hale pitched for Luverne High School in their only state championship.

He led the team in strikeouts and was the first in the pitching rotation for the Tigers during his time at Luverne.

“Early on, I could tell from Corey that he had a love for the game that a lot of guys didn’t have,” said former LHS Head Baseball Coach Andre Park. “He loved being at the baseball field and was always working to get better.”

Hale finished up his playing career at the University of Mobile pitching his best. Hale went 14-1 in his last season, spotting a 1.27 ERA with 124 strikeouts in 92.1 innings of work. He held his opponents to a .189 batting average and only allowed two runs or less in 13of his 15 starts, including nine scoreless innings.

“Watching him in college has been really fun,” said Corey’s mother, Gloria Hale. “Regardless of what happens, it’s just been great to watch him play the game he loves.”

In his time as a Ram, Hale tied a few records held by former pitchers, with his 124 strikeouts he has the third-best total in school history.

The first stop for Hale in his professional baseball career is Arizona where he will continue his training.

COLUMN: Open yourself to a road of new opportunities

I used to envy people who lived their whole lives in the same place. I thought it was cool to... read more