Pierce inducted into hall of fame 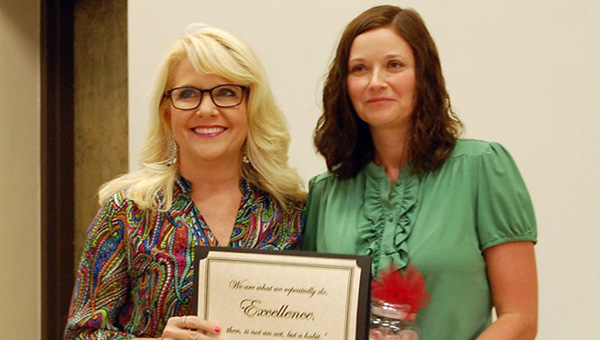 McKenzie School’s Shawnee Pierce, right, was inducted into the Jacksonville State University Teacher Hall of Fame on May 22. She was recognized for the honor at the Butler County Board of Education’s meeting on Thursday night. She is pictured with Litta Norris. (Advocate Staff/Beth Hyatt)

Shawnee Pierce has dedicated nearly two decades of her life teaching the children of Butler County.

Her hard work was recently rewarded with her induction into the Jacksonville State University Teacher Hall of Fame, which was founded in 1969 to honor and to recognize the classroom teachers of the public schools in the State of Alabama.

“I cried! I was overcome with such a feeling of pride and honor to have made it to the top 5 in the competition. So, to actually win was amazing,” Pierce said.

In order to be considered for the hall of fame, there is an application process that must take place. Interested applicants must submit an application, resume, letters of recommendation and several essays. Pierce made it into the top 5 of the applicants and therefore was granted an interview with a panel of judges.

“I do not think they got the types of answers they were looking for because I really just spoke from the heart,” said Pierce.

Pierce was nominated for this award by McKenzie’s principal, Mike Gunter.

“It means a lot to me that he felt that I was deserving of such an award,” said Pierce.

Pierce began teaching preschool in Butler County in 1998 while attending college to earn her education degree. After receiving her degree, she taught sixth grade at Greenville Middle School. Pierce is now a teacher at McKenzie School and has been teaching there since 2003. While there, she has had the opportunity to teach kindergarten, second and third grade.

Pierce comes from very humble beginnings and had many obstacles in her path as she pursued her college degree. Pierce attributes her success in life to God.

“I am just so grateful to God for everything he has done in my life,” said Pierce.

Pierce said that it took much extra time and effort on her part to be the best possible teacher she could be for her students. She measures her teaching success by the personal relationships she builds with her students. In Pierce’s opinion, nothing compares to hearing a child say, “I love you, Mrs. Pierce. You are the best teacher.”

Her favorite part about teaching is seeing her students grow and experience success in areas where they may have been struggling. Her favorite age to teach is kindergarten because she gets the chance to see a tremendous amount of growth in just the span of one year.

Pierce believes that her teaching ultimately comes down to the students and their success in the future.

“When a child I taught in elementary school comes to my classroom and wants to take a picture together in their high school graduation gown, nothing compares to that feeling,” said Pierce. “That is success and impact in the life of a child.”

Along with Pierce, Johanna Morgan of Munford Middle School and Pamela Harman of Spain Park High School were also inducted into the hall of fame.

The Butler County Board of Education approved on Thursday the hire of three new Bright Beginnings teachers. Pictured are, from... read more