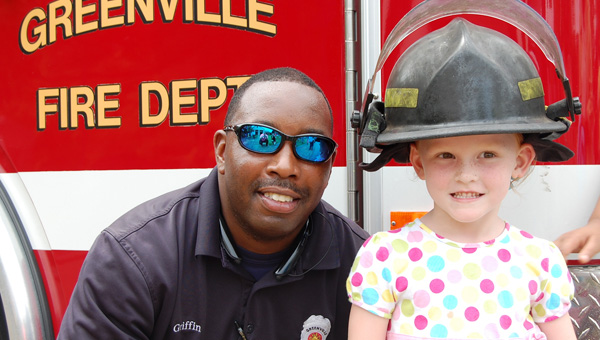 There were a number of heroes at the Greenville-Butler County Public Library on Friday, including one of the superhero variety.

While Spider-Man may have been the most famous of the heroes, it was the firefighters and the police officers that were the real stars on Friday.

Library Director Kevin Pearcey said the event was a great opportunity for children to learn about those individuals who keep our community safe in a relaxed and informal environment.

Sgt. Barry Alford and Firefighter Holsie Griffin gave the children tours of the fire engine and shared how they became firefighters.

Officer Thomas Hallford allowed the children to see the inside of his squad car and explained that he had wanted to be a police officer for as long as he could remember.

“I got my start in 2007 and I’ve been protecting the place we call home since then,” said Hallford.

Hallford told the children that his job was to patrol, stop speeders and keep illegal drugs off of the streets.

“I think these heroes were really cool. I really liked Spider-Man,” said Blake Philips. “But if I had to choose what kind of hero I wanted to be, I would definitely be Batman.”