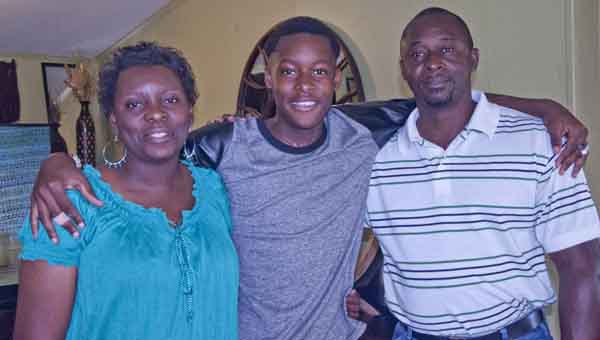 The Salter family say they are thankful for the support they received from the community after Jermany’s May 20 accident. Pictured, left to right, are Annie, Jermany and Douglas.
JOURNAL PHOTO | MONA MOORE

It took more than three hours to stabilize 16-year-old Jermany Salter after his wreck. And stabilization only gave him a fighting chance to survive being transported from Crenshaw County Hospital to Baptist South in Montgomery.

“The Crenshaw nurses on staff that day later told us they didn’t think he was going to make it,” said Annie Salter, Jermany’s mom. “They said if they had to guess, he was just one out of 100 that could survive that.”

Jermany was involved in a wreck on Carter Road May 20 at about 5 p.m. He said he does not remember everything that happened. He recalled the truck was turning off a paved road onto Carter, a dirt road, at the time of the wreck. The vehicle fishtailed and went airborne as it crashed into a ditch, ejecting Carter and a friend who were riding in the back of the pickup. The friend hit the road and survived without serious injury.

“It threw me to the ground and I cart wheeled into a barbed-wire fence,” Jermany said.

The barbed wire left gashes in his hands, arms, chest and neck. Deep scars are still visible on his right hand, where he defensively blocked his head from taking the full force of the impact. His mom said the block might have been the only thing that kept Jermany from being decapitated.

With two collapsed lungs, Jermany freed himself from the barbed wire and stumbled to his friends in the truck, asking them to call 911.

“It’s a miracle he had no broken bones,” Annie said. “He’s a walking miracle.”

Witnessing the wreck from a trailing vehicle, Jermany’s friends, Garrett Barksdale and Paul Lowery chose not to wait for emergency vehicles to respond. They helped Jermany into their vehicle and raced to the emergency room.

Jermany passed out before they reached their destination.

“His two friends said about half a mile before they got to the hospital, he began to kick the dashboard and pull at their hair, fighting for air,” Annie said. “Doctors said he would not have made it if they’d waited for an ambulance. I praise God for him (Barksdale) just knowing to get him (Jermany) and go. They didn’t wait a minute. And thank the Lord they didn’t.”

Jermany needed chest tubes in both lungs and he’d lost a lot of blood. Crenshaw County’s emergency room staff contacted Jermany’s parents and worked for hours to stabilize him for transport to Montgomery.

“The scariest part for me was not being able to see him until after midnight,” Annie said.

While waiting to see her son, Annie and his father, Douglas, were not alone. More than 30 people drove to Montgomery to support the family.

“It seemed like all of Brantley came up to see him. They didn’t leave our side,” Annie said. “I’ve always loved Brantley and I knew we had a special community, but going through this really has shown us there’s so much love here.”

Annie grew up in Opp and moved to Brantley when she married Douglas, a Brantley native, in 1999.

Douglas said he was not surprised by the support his family received.

“I already knew how people come together as one big family. I knew we had a lot of support from his family, friends and coaches already,” he said.

In the 13 days that followed, the support continued and Jermany got better and better each day. In that period, Jermany’s older brother, DJ, was supposed to move to Troy and start school. Annie said several people offered to move DJ and help him get set up (a two-day process) so that she and Douglas could stay by Jermany’s side.

“And coaches from Troy came to the hospital the night of the accident to see about DJ and Jermany,” Annie said. “They showed their support and concern for all of us.”

The Salter family expressed their heartfelt gratitude for the support they received, and still receive.

“There were just too many to name,” Annie said. “The (Brantley) school principal, teachers, coaches, churches came together and lifted prayers up for him. And they continue to help us to this day. The support and the care that we got were amazing.”

Jermany’s first words to his parents on the night of the wreck were about his favorite sport, football. The Brantley Bulldog asked his parents to call his coach and tell him he would not be playing this year.

“I just want to get well and focus on basketball,” he said.

Jermany can only speak in a whisper. The chest tubes left him with damaged vocal cords that could take four months to recover. His lungs are getting stronger, but he still gets winded when he tries to speak and has been restricted from any physical activity.

This was going to be Jermany’s first year he could wear number 22 on the varsity football team. It is the Salter number. His dad and brother wore it before him.

After reporting he was going to sit out his junior year on the team, but return to play his senior year, Jermany’s coach assured him he was still a part of the team and the number 22 would be waiting for him.

Jermany was released from the hospital on June 2. His mom knew he was going to be okay after helping him out of the hospital bed that day.

Jermany said the accident has changed him for the better.

“It made me think about the things I took for granted and made me make wiser decisions,” he said.

Douglas has had a similar reaction. “It really makes you look at life differently,” he said. “That at any time, your life could be ended.”

Annie thanks God for every day she still has with her son.

“I’ve always been thankful,” she said. “Now, I just take each day as a joy because I know I could’ve lost my baby.”