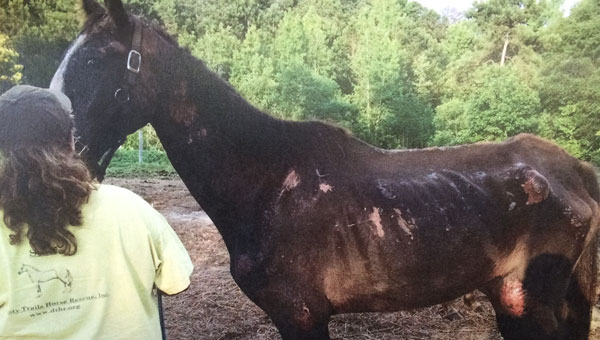 Pictured is one of 11 malnourished horses found near Greenville’s Conservation Road area. Nine of the 11 horses were relocated to another pasture. Two others, thought to be suffering from life-threatening conditions, were sent to Dusty Trail Horse Rescue for rehabilitation.

Butler County Sheriff’s Office deputies stumbled upon a gruesome sight on June 2 after responding to a local tip about mistreated horses.

Harold Coleman, 56, was arrested and charged with 11 counts of cruelty to animals.

The 11 counts were a result of the eight malnourished horses found at his home, in addition to three others found on Conservation Road that also belonged to him.

“We were just following up on a tip,” said Butler County Sheriff Kenny Harden.

“Somebody called us and said ‘hey, these horses are in bad shape and someone needs to look at them.’ We were able to follow up on that, make contact with the owner and arrest him, and give him some instructions to go by to try to maintain the horses.”

Coleman told the responding deputies that he had been feeding the horses a combination of sweet feed, hay and alfalfa, though photographs taken at the scene show a lack of grazing for the horses.

The two most malnourished horses were sent to the Montgomery-based nonprofit Dusty Trails Horse Rescue facility for treatment of potentially life-threatening conditions.

The other nine will simply be relocated to another pasture for a more natural rehabilitation.

“Coleman has made arrangements with someone else to put the horses on their property so that they will have grass to eat,” Harden added.

“And we will monitor them to make sure that he is taking care of them.”

Harden said that the situation is uncommon, though it does happen occasionally in the Butler County area, particularly in times of economic difficulty.

“This isn’t the worst case I’ve seen.  I’ve actually gone out there and we’ve had horses dead in the field,” Harden said.

“But my thing is if you can’t afford to keep them, then you need to do something with them.  Keeping 11 horses is a pretty good financial (responsibility); buying feed and medicine for them is hard to do it if you’re not financially stable.”

The two horses sent to Dusty Trails Horse Rescue were believed to be in stable condition, according to the most recent checkup from deputies.