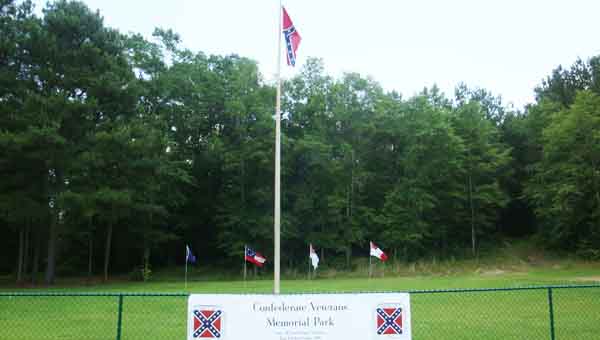 David Coggins has an issue with history books.
“They’re written by the winners,” he said.
As a footnote and correction to what he learned in school, Coggins has opened Confederate Veterans Memorial Park. He bought the 1-acre land along Hwy. 331 to teach others and honor ancestors who fought in the Civil War, which he says was “not really a civil war” at all.
Coggins has erected five confederate flags and posted a banner displaying the name of his park, which is open to the public. As funds become available, he will add a memorial and a replica of an 1860-era cannon.
“It’ll be an educational park where school kids can come, anyone can come,” he said.
Coggins also plans to revive a Crenshaw County chapter of the Sons of Confederate Veterans.
“We used to have one, Camp Ben Bricken No. 396,” he said. “The camp kind of died out in the 1920s.”
He is a member of the nearest chapter, which is in Enterprise. Coggins said many people have expressed interest in joining the organization, but would rather not drive to Enterprise for the meetings.
In fact, a new chapter of the Daughters of the Confederacy was recently established.
Coggins stressed that neither organization was a hate group.
“Nothing could be further from the truth. The Sons of the Confederacy is a Christian organization that stands for everything that’s right,” he said. “It’s not a hate group or a racial organization. We despise the KKK and what they’re doing.”
To join the organization or donate funds for the new park, contact Coggins at 334-672-1665 or by email at david.coggins759@gmail.com. He said he would be more than happy to deliver or help fill out an application. Part of the process involves filling out a lineage form and proving you are a descendant of a Confederate soldier.
The cost to join the organization is $50 a year. Membership includes a subscription to a magazine and qualifies family members for scholarships.