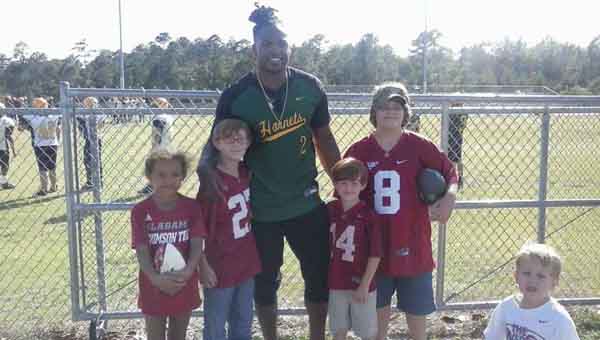 Highland Home 12-year-old Troy Kelley has been screaming “Roll Tide” since he was 2.

“He is a huge, huge Alabama fan,” said Kelley’s mom, Kathy Vining. “He has to go to the games every year. He keeps up with the recruiting and he’s going to the A.J. McCarron football camp in Mobile this summer.”

Vining recently found a way to surprise her Bama fan. She arranged for him to meet Alabama star running back Derrick Henry.

The surprise started out as a request for an autographed photo. Vining found Henry’s dad on Facebook and made the request after seeing posts that he had hooked other Henry fans up with similar requests.

Since Henry was coming home to Yulee, Fla. that weekend to watch his younger brother play football, his father suggested Vining bring her son down to meet him at the game.

Vining loaded up her vehicle with Kelley, his brothers, and other family members.

“My son had no idea. He thought we were going down to the beach,” she said. “He was shocked, surprised and grinning everywhere we went. All of the kids were just so excited.”

Vining drove six hours and rented a hotel for the night. The children learned the truth when they got to the stadium and met Derrick Henry, Sr.

The star and his family impressed Vining. Henry, Sr. not only met them at the gate and escorted them to his son, but also called Vining to make sure they had made it home okay. Henry, Jr. spoke with the children, signed autographs and posted a photo of them on his social media account.

“I’ve never met an athlete so nice, so welcoming,” Vining said. “Overall, it was one of the best days we’ve ever had.”