Police officers pledge to protect and serve the public.

And sometimes, that public comes with four furry legs and a “meow.”

Erica Knight, a dispatcher for the Georgiana Police Department, first heard a cat’s plaintive cry mid-May of this year while working her shift at the station.

“I kept hearing meowing and couldn’t locate the source, so I grabbed a flashlight after my shift ended and pulled up a video of cats meowing on YouTube on my phone,” Knight recalls.

The dispatcher lured a small gray kitten from its hiding place on the porch of Rose Memorial Library that night. She had no luck in catching the gun-shy feline, however. 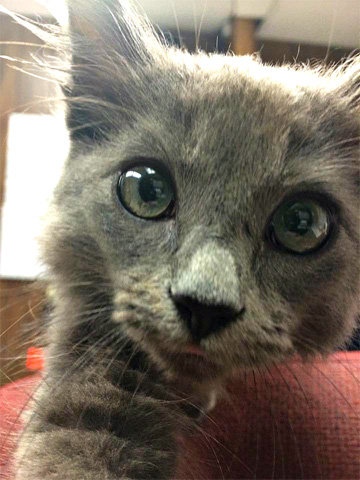 Millie the Kitten was found abandoned near the Georgiana Police Department and quickly became a crowd favorite at the station. (Courtesy Photo)

The kitten stayed put — and in hiding — most of the time. Knight wasn’t giving up, trying repeatedly to catch the frightened feline over the next several days. She finally managed to capture the little cat, which promptly rewarded the dispatcher with scratches on her arm and shoulder.

It quickly became apparent to Knight and the GPD officers that this young feline was on her own.

“No matter how long or loud she meowed, no mama cat ever came to her rescue,” Knight says. “We’d all look for her and usually find her either under one of our vehicles or in the shrubs at Nightingale Uniforms.”

Soon they were feeding the kitten leftovers from the station refrigerator, then buying her cans of cat food. And the little cat quickly learned shift change at the police station equaled mealtime.

“Most of us at the police department have pets or love animals, and I guess this ball of fluff tugged at our hearts,” Knight explains. “The guys would always ask about her and go looking for her. We worried if we hadn’t seen her. Officer Tom Birtley was the first to buy cat food for her. Dispatcher Jena Scott and Lt. Travis Waters also bought food for the kitten.”

The tiny gray fluff ball still wouldn’t let a soul put a hand on her, but she gratefully ate the food the officers and dispatchers provided for her.

It was clear “Police Kitty” wasn’t going anywhere, and her caregivers in blue considered making her the official station cat — if they could only come up with a name.

“And then it came to me,” Knight said. “The police department is on Mill St., so why not call her Millie?”

And Millie she became.

Knight kept working with the kitten, who began to allow Knight to hold her.

Then, on June 2, Lt. Waters told Knight, knee deep in paperwork at the time, that something had apparently happened to Millie’s tail.

“I didn’t pay much attention, but when I went out later to feed her, I saw that more than half of Millie’s tail was a bloody, dirty, exposed mess,” Knight says.

“It looked as if it had been clamped in a vise or caught in a weed whacker and then snatched out!”

The dispatcher was disheartened by the kitten’s condition.

“Just when Millie was starting to trust humans and letting me hold her without trying to scratch my eyes out, it was killing me to see her in such bad shape,” she recalls.

After the injury, Millie jerked away and hissed whenever anyone tried to touch her.

Knight drove home to McKenzie that night, fearful Millie might have “gone off somewhere to die.”

The next day when Millie showed up at feeding time, Knight was ready. She caught the injured kitty in her gloved hands — and learned the hard way giving a kitten, especially one in pain, its first bath is no easy task.

“Let’s say she was not pleased with me. After some time in the station, she ended up bolting out the door,” Knight explains.

“I didn’t know how in the world I was was going to pay for it, but I had to do something to help Millie. I reached out to the Butler County Humane Society and they offered to share Millie’s story with those who might help with the expenses,” Knight says. “Clay Hill Animal Clinic was also willing to work with me on payment arrangements.”

Knight praises the clinic and Dr. Tina Hays for their “amazing” care of Millie, whose tail was so damaged it had to be amputated.

Now, the “makeshift Manx” is recovering at Knight’s home.

“Millie came home with stitches and a cone,” Knight says. “She’s in good spirits and keeps trying to nuzzle me, but the cone is in the way.”

Knight is now determined Millie will now have a home with her and her family.

“Ever since reading Macbeth in high school, I’ve wanted a solid gray cat with piercing green eyes. Millie is my Graymalkin,” Knight says with a smile.

Anyone who wishes to help Knight defray the medical expenses incurred by Millie’s recent surgery can make a donation through the “Donate” button at the bottom of the page on the BCHS’s blog site butlercoalhumanesociety.com, indicating the donation is for Millie’s Fund.