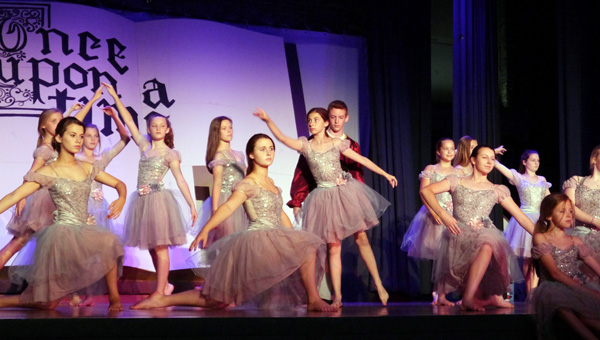 For dance instructor Sonya Rice, putting on her annual recital, “Once Upon a Time: Fairy Tales and Nursery Rhymes” at the Ritz Theatre last weekend was a case of “everything old is new again.”

“While I am at the theater throughout the year [as assistant director and choreographer] with the Ritz Players, my dance studio had not performed at the Ritz since 2009’s tribute to ‘The Lion King,’” Rice said. “With the growing number of students our school was accommodating, we moved our performances to the larger auditorium at Greenville High School.”

She believes it was fate that led her and her troupe of 85 dancers back to the storied boards of the Ritz stage — a move that brought back poignant memories of her daughters Cory and Courtney as babies taking naps on pallets in the aisles while their mother rehearsed with students at night.

The Ritz stage and dressing rooms may be smaller than those at the high school, Rice says, but the renovated downtown theater’s new lighting and sound equipment are a definite plus “that set the mood for our production, too.”

“Now I have so many other children with whom I can share this wonderful old theater,” Rice adds with a smile.

Rice had another big change this year, moving her dance studio from West to East Commerce Street — news that many of her students did not initially welcome.

“Most of them had grown up at the old studio and the tears were flowing, but I stuck to my guns and was not going to let it influence me,” Rice says.

Ultimately, her dancers learned to embrace the new location (“Air conditioning!”) and the quaint, historic surroundings, with older students often walking down the street together on long rehearsal days to eat lunch or supper.

The veteran dancer/choreographer likes to keep things fresh and to stay connected with the world of dance. When the opportunity is there, she journeys to New York City where Courtney resides and takes dance classes.

“I am always the oldest one in the classes, but it’s OK. I can still shake a tail feather,” Rice says with a grin.

She admits that busy mind of hers is always thinking ahead to the next production, contemplating the choreography she wants to do, the stories she wants to tell through the art of dance. Rice’s head is filled with ideas for production themes, she says.

“Each year, I look at the technical skill of the dancers I have, the costumes available to me, and, finally, that inner voice tells me, ‘This is the one,’” Rice explains.

While change is something she embraces, there is one thing about her productions she hopes will remain constant for as long as possible. “Courtney and Cory have always been here — it’s not just their help with the final props, the kids and managing the stage. I could hire people to do those things. It’s deeper than that,” Rice stresses.

“Ever since I owned my own studio, they have been with me, every step of the way and in every show for 19 years, traveling from wherever they were going to school or working to be here. I would be lost without them.”

Sonya’s Dance and Fitness will be holding a dance camp later this summer for several age groups “that will be entertaining for all levels,” the studio owner says. “It’s a great way to introduce your child to dance and for our veteran students to stay in shape for the fall classes.”