Hank Williams Festival draws fans from far and near 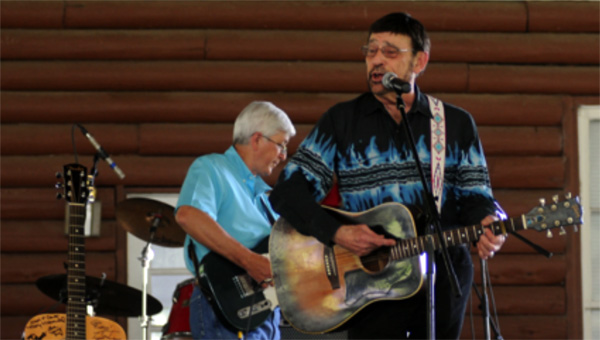 While many may struggle to find Georgiana on a map, Hank Williams Sr. has made it a must-visit destination for many country music fans.

A number of those fans converged on the small town this past weekend to attend the 36th Annual Hank Williams Festival. The festival took place at the Hank Williams Sr. Music Park on the grounds of the Hank Williams Boyhood Home and Museum and attracted a very diverse crowd.

Fans from all over the country came to hear their favorite Hank Williams songs; one dedicated fan, Narelle Turnbull, travelled more than 9,000 miles to show her passion for all things Hank Williams.

Sherri Bracken, vice president of the Hank Williams International Fan Club, emceed the concerts throughout the day as well as promoted fundraising events for the museum.

“The Fan Club helps out the festival. We also have a membership drive. We like to have folks that are members of our fan club to help the museum with their artifacts,” Bracken said.

Bracken said Jett Williams, the daughter of Hank Williams Sr., has always been a supporter and a big helper not only to the Fan Club but to the festival.

This festival is popular to many Alabama natives, but also to visitors from other states and countries.

Wanda Crook and War Reese traveled from Tennessee to enjoy the festivities. This was Crook’s first visit to the Hank Williams festival; Reese has been attending for years.

“I used to song write and sing. Hank Williams and Merle Haggard were the two biggest influences on my songwriting,” Reese said.

The pair plan on coming back next year.

While Tennessee is quite a drive for fans to make, one of the longest distances travelled was by Turnbull who came from Cairns, Australia.

Turnbull met Georgiana native Morris Middleton while he was travelling in Australia, and the two discovered they both shared a love for country music.

“I met this local gentleman, he was a client in my limousine car, and I picked up on his southern accent. We talked country music; he said if you ever come to Alabama, come to Georgiana,” said Turnbull.

Turnbull and her sister served as entertainers for the soldiers in the Vietnam War. Since Turnbull had such a passion for country music, the two would sing Hank Williams Sr. songs. She has always had a heart for country music and being at the festival reminded her of those precious memories.

“I’m a great fan of Hank Williams. It’s nice to hear traditional country music; I saw very little of that in Nashville. It’s been a beautiful experience,” said Turnbull.

This festival played host to a multitude of performers, but one of the crowd favorites was the Southern Legends band. The current members have been together since 2009 and are made up of Alabama native talent.

Bass player and vocalist, Edna “ET” Thomas is one of the three remaining original band members.

“When I first started with the band in 1977, we were playing in the second festival. We took a few years off and started back in 2009. We’ve been here since,” said Thomas.

Thomas has been in the music business since she was three years old and her opportunities and experiences have continued to grow since then. She enjoys coming back to the festival year after year and enjoys the feedback she and the band receive from the crowds.

“People come together from everywhere and the crowd is just marvelous. It’s a wonderful venue and this is Hanks’s hometown,” Thomas said.

Hyatt recognized as School Nurse of the Year

Butler County Schools Lead Nurse Debbie Hyatt was honored as the 2015 Registered School Nurse of the Year at the... read more