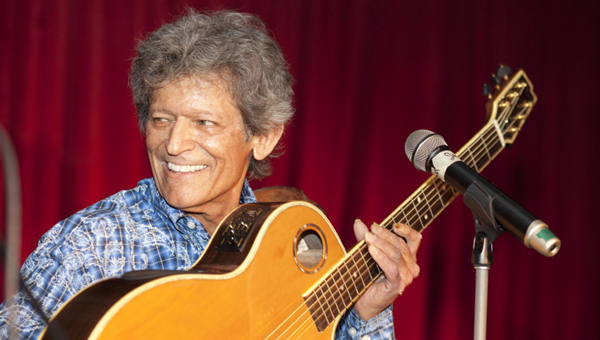 “I’ve been listening to Hank Williams since I was a child,” said Rodriguez. “His songs, life, and music are ingrained in me. I went to see the movie about him, ‘Your Cheatin’ Heart,’ because the alcohol that affected him was also a problem in my family.”

Rodriguez grew into a fan of Williams, and will pay tribute to the country music icon this weekend when he takes part in the 36th annual Hank Williams Festival, which will be held Friday and Saturday at the Hank Williams Sr. Music Park in Georgiana.

As a child, Rodriguez fell in love with music.

The second youngest of 10 children, he grew up in the small town of Sabinal, Texas, just 90 miles from Mexico. Rodriguez loved to sing, and desperately wanted to learn to play guitar, but there was no guitar in his house.

“The Torres family, who were cousins, lived on a ranch about four miles away,” Rodriguez said. “Several of them could sing and play the guitar. I would walk several times a week to listen to them and get them to teach me the chords. I kept pestering my brother until he bought me one.”

That purchase led to Rodriguez following in the footsteps of Williams.

“As soon as I learned the chords, I would play in the bars and honky tonks of Sabine County,” said Rodriguez. “Sometimes, I would play by myself, and at times, other boys would go along. Whenever a bar would let us in, we’d place a hat on the bar and start singing.”

Rodriguez eventually landed a gig playing five days a week at Alamo Village, a local tourist attraction. It was while playing there that Tom T. Hall, a country music singer and songwriter that penned 11 No. 1 songs, heard Rodriguez and suggested he make a move to Nashville.

“I thought he was just kidding,” Rodriguez said.

Several weeks later, Rodriguez, who was working a construction job at the time, decided to give Nashville a shot.

“I packed two pair of pants, three shirts, and with my last paycheck bought a plane ticket to Nashville,” he said.

Rodriguez gave Hall a call, but Hall was on tour on the west coast. He eventually got a call back, and ended up serving as the singer’s lead guitar player.

“One day (Hall) was going to Mercury Records and he took me along,” Rodriguez said. “I sang two songs. After singing “I Can’t Stop Loving You,” I began to sing it in Spanish. Mercury executive Roy Dea stopped me. I said, ‘Oh boy, I really messed up.’”

But what he had done was earn his big break.

Dea had a contract prepared and signed Rodriguez to a recording deal.

In 1972, Rodriguez recorded “Pass Me By,” which reached No. 9 on the charts and he was voted Most Promising Vocalist by the Academy of Country Music. He had his first No. 1 hit a year later with “You Always Come Back to Hurting Me.”

“We’re going to put on our regular show,” Rodriguez said. “Fans will hear all the hits, plus some Merle Haggard songs. I don’t think we will experiment too much with our music, because I’ve found that most folks that like Hank, enjoying hearing it plain and simple.”

Also performing at the festival will be Brad Magness, The Springs, T. Graham Brown, Jett Williams, Mary McDonald and Colon Leatherwood, among others.

Tickets for Friday are $15, while admission for Saturday is $25.

For nearly two years, the WestPoint Home facility stood empty — a reminder of what was once a thriving business... read more