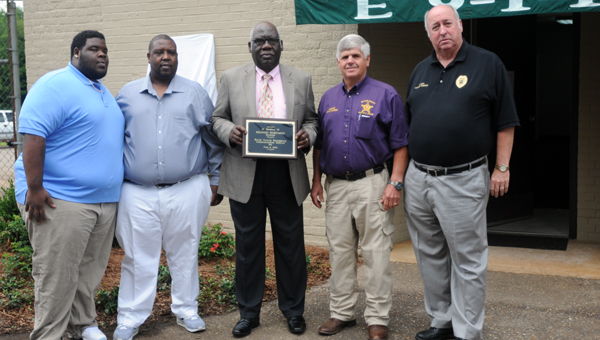 Butler County Sheriff Kenny Harden remembers being dispatched by former E-911 Director Sharon Robinson to the scene of a fight.

Harden responded, got busy with the call and ignored his radio.

When he got back to headquarters, he almost had another fight on his hands.

“Whenever she was dispatching for the Greenville Police Department, an officer would get out on a call, myself too, she’d call every few minutes to check on us and make sure we were OK,” Harden said. “I went on a call one night, it was a fight call, and she tried to call me and couldn’t get me. She sent another officer over there. When I got back to the headquarters she chewed me out because I didn’t answer the radio. I said, ‘Sharon, but I was busy.’ She said, ‘I don’t care. I want to know that you’re OK.’ That’s the kind of person she was. She looked out for us.”

When Butler County E-911 was established in 1995, Robinson left the GPD to become a dispatcher. She was named director in 1998.

“Sharon was an exemplary person,” said Chief Lonzo Ingram, who hired Robinson as a dispatcher for the GPD. “She was just a good person. Everybody just doesn’t get a building named after them. These things happen just every now and then. We’re glad to be here today to do that.”

Robinson’s son, LA, said he was grateful that the city would honor his mother by naming the building after her.

“I used to tell Sharon all the time that 911 can go on without you, but she’d say, ‘Daddy, as long as I’m in charge I want to make sure everything runs right.’ She was dedicated to this, and her employees were dedicated to her,” he said.

Harden said that the plaque on the front of the newly named Sharon Robinson E-911 Communications Center will serve as a testimony to her impact on the community she served.

“People like (Chief Ingram), (Mayor Dexter McLendon) and myself, that have worked with Sharon for so many years, we don’t need a plaque to remember her,” Harden said. “We’ve got memories of her. This is for the people coming along so they will know what Sharon meant to 911 and all the law enforcement in Butler County.”