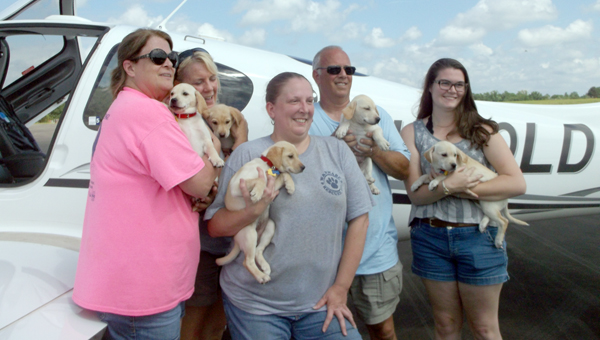 Pilots N Paws pilot Jeff Bennett, alongside four rescue volunteers from across Alabama, show off their five puppies before loading them for their trip to new loving homes in Florida as part of Pilots N Paws Sunshine Fly-Away. (Courtesy Photoo)

More than 100 animals got a second chance at life on Saturday thanks to a large-scale rescue effort that included a stop in the Camellia City.

Pilots N Paws pilot Jeff Bennett and other volunteers made a stop at Mac Crenshaw Memorial Airport to pick up nine puppies.

Pilots N Paws is a nonprofit organization that specializes in organizing the transport of animals in need of safe homes between pilots of small planes and rescue volunteers.
The organization began almost as sheer coincidence as pilot and founder Jon Wehrenberg agreed to help co-founder Debi Boies transport a rescued Doberman from Florida to South Carolina via plane.

Butler County Humane Society president Herbert Morton said such rescue efforts are needed because of an imbalance in the area.

“There are still more cute, lovable, adoptable pets in Alabama needing a good home than there are homes and families in our county and our state who want to adopt them,” he said. “In other parts of the country, there are lots of people really wanting to adopt rescue animals, and there aren’t enough to go around.”

“This program helps rescue so many animals, but it takes little to no time for the animals to take over shelters again. We ask that you spay and neuter your animals so that the chance of these other pets finding homes is heightened,” said Morton.

For more information on the Butler County Humane Society, call (334) 210-7600 or email butlercountyhumanesociety@gmail.com.

The Greenville City Council voted unanimously Tuesday to rezone a portion of property along Paul Stabler Drive from commercial to... read more