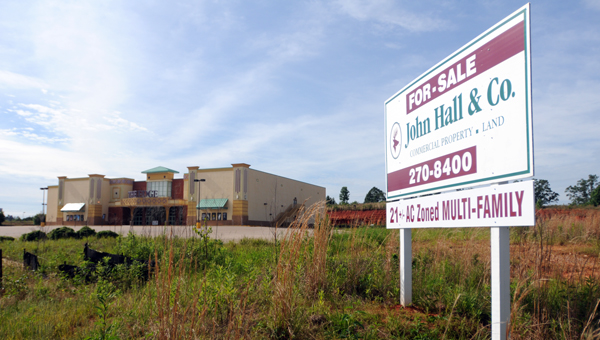 The Greenville City Council voted unanimously Tuesday to rezone a portion of property along Paul Stabler Drive from commercial to multi-family residential in hopes of attracting a developer to build apartments in the Greenville Commons shopping center. (Advocate Staff/Andy Brown)

An apartment project planned for Greenville Commons has cleared a major hurdle.

The Greenville City Council unanimously approved rezoning of 21 acres along Paul Stabler Drive from commercial to multi-family residential to pave the way for the potential project. The property is owned by Elba, Ala. based National Security Fire and Casualty Company.

“We are working diligently to try and get somebody to come in here and build some upscale apartments,” said Van McCall, who represented the company at Tuesday’s public hearing and city council meeting.

Greenville Mayor Dexter McLendon said similar developments have worked in other cities, such as Spanish Fort and Prattville.

“We’ve been talking for some time about the apartments,” McLendon said. “A lot of cities are doing that where they have apartments out there and they have doctors’ offices, Walmart and that sort stuff in the same area. These apartments are going to enhance this piece of property.”

City officials are also hoping the addition of the apartments will lead to future construction in the area, which is already home to restaurants, a church that meets in the movie theater and doctors’ offices.

“I hope apartments do go in that area because it’s going to give people a place to live, and as they move out of those apartments, I hope they are going to build some houses in that area,” said McLendon.

McLendon said he had met with a developer from Birmingham that has expressed an interest in the property.