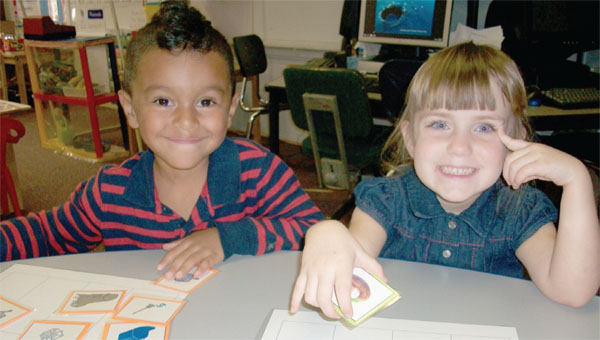 Butler County received $379,200 in grant funding for its voluntary pre-kindergarten program. Lyric Robinson and Janie Feralin work on letter sound and word matches at Greenville’s Bright Beginnings. Both are graduates of the program. (File Photo)

Nearly 60 Butler County preschoolers will benefit from the expansion of the state-funded voluntary pre-kindergarten program.

“(Students taking part in pre-k) makes a huge difference,” Simmons said. “The students who complete Bright Beginnings outperform the other students in kindergarten every year. These students are typically the district winners for the Spelling Bee, Science Fair, Scholars Bowl and Math Tournament.”

Simmons said school officials are still working on determining the locations for the new classrooms.

“Hopefully, we will add one to each site (Georgiana, McKenzie, and Greenville),” Simmons said. “This will give an additional 54 children access to pre-k in the county.”

Grants were awarded based on several criteria including local needs, local demand and assurances of high quality standards at the new and expanding pre-k sites. Local match funding of 25 percent will be required.

Remaining grants will be allocated to additional sites based on various needs in the near future.

“Demand for these grants has far exceeded our supply,” Bentley said. “Only 13 percent of Alabama’s four-year-olds are currently enrolled in the First Class program and that is the reason we need to continue expanding access to this program. It is my goal to give more families the option of enrolling their children in voluntary pre-k, and I will continue my efforts to expand access to First Class even more.”

The Alabama Department of Children’s Affairs received 410 applications for new First Class Pre-K classrooms for the 2015-2016 school year. This is the largest number of grant requests the Department has ever received.

Alabama’s First Class program is nationally-recognized for its quality.  Alabama is currently one of only four states in the country to meet all 10 quality benchmarks established by the National Institute for Early Education Research.  The benchmarks include teacher training, staff-child ratios, support services and more.  First Class has now met all of these benchmarks for nine years in a row.

First Class is managed by the Alabama Office of School Readiness.  The office is part of the Alabama Department of Children’s Affairs, which is overseen by Bentley.

“While these grants will help us offer voluntary pre-k to many more families, there is still a long way to go before all children have access,” Bentley said.  “That’s why it’s important to build on this progress and make sure we’re offering this high-quality program to even more families in the years to come.”

Jerry Myers was among the veterans that took part in the Walk of Honor during Monday’s Memorial Day Celebration in... read more