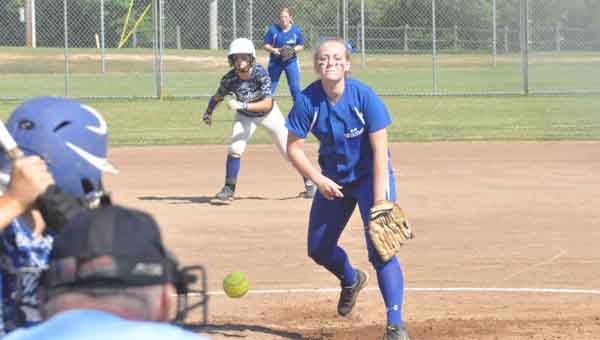 Highland Home softball saw regional play this season. The team lost in Round 1 of the 2A Varsity Softball South Central Regional Tournament in Troy and made it to the second round of the losing bracket.

Head coach Cassie Newman said she was proud of her team.

“This year, we started off rocky and ended up strong,” she said.

Regional play was full of hills and valleys. The team started off with a 10-0 shutout against Horseshoe Bend.

“We were hitting the ball, but we just couldn’t find a hole,” Newman said.

The Flying Squadron came back strong later that day in the first round of the losers’ bracket. Highland Home beat Pickens County 11-3.

“We were on it that game,” Newman said.

The team hit a wall the following morning, losing 15-3 to Reeltown.

“We were just flat,” she said. “We started hitting the ball again, but couldn’t make it happen.”

Newman had her eye on next year. The team will lose key spots, but will have a solid core, including this year’s number-two pitcher, Katelyn Sport.

“With five seniors, we’ll have some rebuilding next year,” she said.

Tunstall fled from law enforcement after being stopped for not wearing a seat belt. A man wanted for several felonies... read more