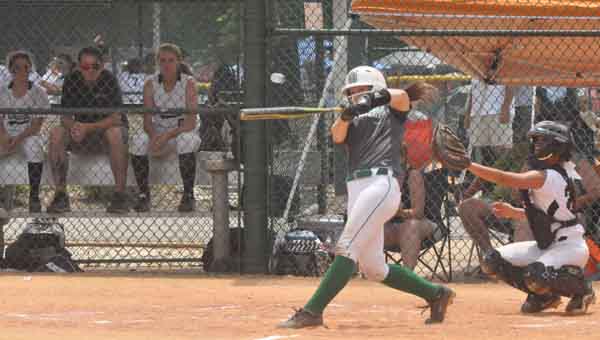 Leanna Johnson got the win for the Bulldogs on the mound after throwing a complete game. She allowed no runs to score and kept the Mustangs to 4 hits and recorded 10 strikeouts. The Bulldogs recorded 8 hits, and scored 6 runs off of the Mustang’s pitcher Chelsea Cox.

The Bulldogs took a quick lead in the top of the second inning scoring 3 runs off 4 hits, a walk and a bunt. Jessica Hermeling started the inning off with a single and then scored on Kassidy Wilcox’s double to left field. A pair of singles by Johnson and Lainey Wells scored the other two runs later in the inning.

The Mustangs looked to score a few times throughout the game but Johnson was able to end the threats. “She’s a winner and she’s very good under pressure,” said Head Coach Cindy Hawthorne. Hawthorne was very pleased with her freshman’s performance and said she has done a really great job all year.

After a few scoreless innings, Hawthorne told her team it was time to start swinging at their pitches and to be more patient in the box. In the seventh inning the Bulldogs extended their lead to 6 runs.

The Bulldogs were able to score 4 more runs in the top of the seventh off of an error, two singles and a walk.

Wells recorded her second hit of the day with a single to start the rally followed by a walk from Olivia Jones.

A single by Sydnee Bryan scored the first run of the inning and Hermeling forced an error to score the other two runs.

With the victory over the Mustangs, the Bulldogs will move onto the semifinal game Friday morning at 9 a.m.