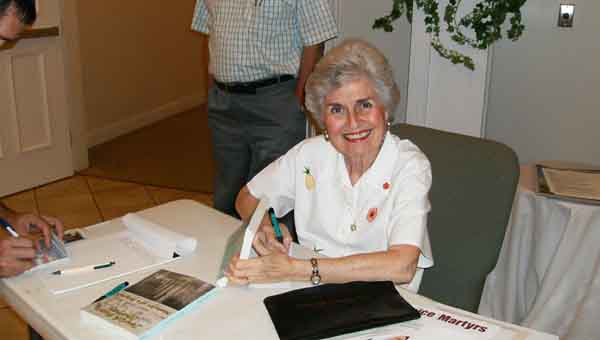 Nancy Petrey will have a book signing on Wednesday, May 20, at South Luverne Baptist Church in the front vestibule of the church from 4 p.m. till 6:15 p.m. and invites the public to come.

Her new book, “Habitation of Honey, Poems and Songs,” is a collection of Bible-based poems and songs she has written over the years from the 1980s up until publication of the book.

She said she was happy that her granddaughter, Taylor Petrey, has sketched illustrations for nine of the poems.

This is the second book Petrey has authored. Her first book, Jewish Roots Journey, Memoirs of a Mizpah, was released in 2012.

Petrey’s third book, “Why Christians Should Care About Their Jewish Roots,” will be available on May 30.

All three books are published by Energion Publications in Gonzalez, Fla.

The poems and songs cover a wide variety of biblical subjects. There are lessons on pride, prayer, the Creation, personal relationship with Jesus, His presence, the temple mount, view from heaven of the Incarnation and involvement in current issues, to mention a few.

“A miracle is included,” she said. “Some are funny and some prophetic.”

These poems and songs were inspired by the Holy Spirit in different situations, says Petrey. “I may have been standing at the mirror, putting on my makeup and have to run get a pen and paper. Or while reading my Bible I would be amazed at a new insight and have to record it as a poem. Or I may have been so upset about a news story that I sought the Lord for His take on it in poetic form.”

“Once I had such a good time at choir practice, laughing so hard, that my memory of it the next morning came out in a song,” she said.

Petrey said she believes that God speaks to people in many ways and the experiences should be shared with others for their encouragement.

Petrey hopes “Habitation of Honey” may be one of the means God uses to prepare the way of the Lord.

“As John the Baptist in the wilderness ate wild honey, he was growing strong in spirit for the day he would recognize the Messiah.  He immersed himself in the Word of God, ‘honey’ for his soul, so he could say ‘Behold the Lamb of God who takes away the sins of the world,’” she said. “Just so, the Bride of Christ should be preparing herself today, ‘eating the honey’ of the Word of God, to be a herald like John the Baptist for the second coming of the Messiah. Like aged wine, many Christians are here at this point in history ‘for such a time as this.’”

Brantley Councilman Lorey Bogen has agreed to turn himself in today, after learning of an additional charge filed against him.... read more