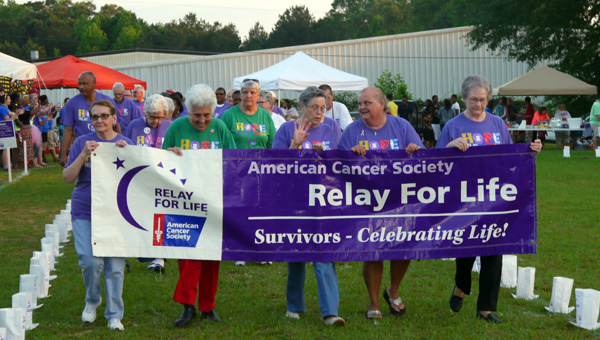 Since its inception in the county 18 years ago, the Butler County Relay For Life for the American Cancer Society has seen changes in leadership, activities and location.  It has weathered tough times economically and seen torrential rains nearly drown its participants.

Yet, like a certain popular advertising figure, Relay keeps going and going.

Last Friday night, 25 teams from across the county came together at the Kiwanis-Butler County Fairgrounds, moving from the YMCA location where the fundraiser had been held for a number of years.

All the figures weren’t in yet at press time, but Marie Owens, event chair and herself a cancer survivor, expects the 2015 Relay with its Superhero theme to easily exceed last year’s totals by $9,000 or more.

“We raised $58,000 last year, and that was with awful weather not allowing us to do much on-site fund raising,” Owens said. “This year, the weather was great and we started out with a cushion of donations that came in after our fiscal year cutoff. Our goal was $70,000 and we are right at $67,000. With our economy continuing to be down, I think that’s pretty great.”

It couldn’t happen without a county-wide effort, Owens said in her opening ceremony remarks, stressing that many raffles, bake sales, car washes, 5 and 10K runs and other team events brought in the bulk of those monies. An additional $17,000-plus came in from a long list of sponsors that event emcee Chad McGriff said “looked like a Chamber of Commerce listing.”

The team taking home the most honors Friday night was First United Methodist Church of Greenville. FUMC won “Best Camp Site” with their Bat Cave and captured both the “Spirit of Relay” Award and “Relay Idol.”

“FUMC also took home what they dubbed the ‘Flushing Away Cancer’ Award for raising the most money in 10 minutes after the purple toilet ended up at their tent,” Owens said with a grin. “They raised more than $500 in that 10 minutes.”

Of course, Relay is not just about fund raising. It’s about having fun while fighting back.

Ann Steiner Gregory of Community Neighbor Bank retained her championship status at Twister for the second year in a row, and the big tug of war was won by Auburn fans. Young Jase Butts impressed the judges with his Incredible Hulk imitation at the Little Superheroes Costume Contest, inviting everyone to “smash cancer!” His team, Comfort Care Hospice, also won the night’s marshmallow eating contest.

“Everyone seemed to have a great time, and unlike previous years, I did not get a single complaint call following Relay,” said Owens, who gave credit to the new lighting and expanded parking at the fairgrounds for creating “happier campers.”

Relay began at the Greenville campus of LBW Community College before moving to the fairgrounds and then to the YMCA field.

“We also had deputies and officers from the county and city in place and their presence makes a difference, too. People seemed to feel comfortable and safe this year,” said Owens.

Owens, recalling how her final cancer treatments in 2002 came right on the heels of her mother’s cancer diagnosis, says she knows the funds raised each year are making a difference for cancer patients and their families.

“The drugs have improved, there are less side-effects . . . people have a lot more hope now when it comes to fighting cancer. But we definitely couldn’t keep doing this without a lot of people’s help and support.”