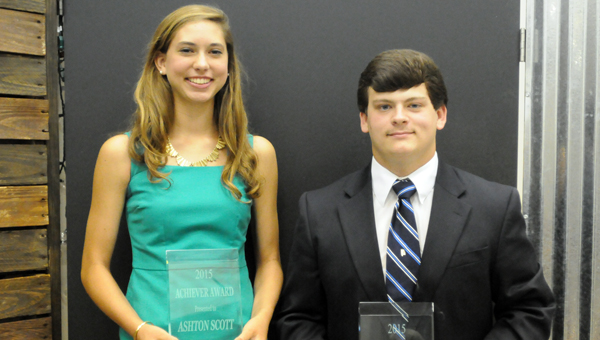 When Georgiana School senior Matthew Sheffield stepped to the podium to accept the 18th annual Achiever Award on Thursday night, he knew he wasn’t standing there alone.

Sheffield was joined in spirit by his friend, Cody Messer, who died tragically in a house fire in March of this year.

“Just recently we had a funeral at our school for Cody and Kacey Messer,” Sheffield said while pausing to compose himself. “I said if nothing else I’m going to try and win this award for them. He’d be proud of me — Cody would. He’s my friend. I’m very blessed to receive this award.”

Sheffield, along with Fort Dale Academy’s Ashton Scott, were presented the Achiever Award during a banquet Thursday night at First Baptist Church.

As the recipients, both Sheffield and Scott will receive a $2,500 scholarship to be used at the college of their choice.

“To be one of the select few chosen as a nominee is a true honor, and receiving this award is nothing short of being utterly blessed,” Sheffield said. “I’d like to thank God because without him nothing is possible.”

Sheffield also thanked his family, friends, coaches and teachers that have helped shape him during his high school career.

Sheffield was a standout in baseball and football for the Panthers.

On the diamond, the Georgiana native earned honorable mention all-state honors as a junior. He was also named team captain and received the Best Pitcher Award, Most Valuable Player, Gold Glove for the infield and the Best Hitter Award.

On the gridiron, Sheffield was named team captain, Best Offensive Lineman and received the Linebacker Award.

“His hard work on and off the field has paid off as is evident by his many accolades,” Norris said. “It has been an absolute joy to coach Matt. The sky is the limit for him.”

Off the field, Sheffield has served as vice president of the Student Government Association and president of TGIF. He’s also a member of the school’s math team and scholars bowl team and is the Class of 2015 valedictorian.

Scott said she was overwhelmed to be selected as the female recipient of the award.

“This is such an honor,” said Scott. “I have so many people to thank for helping me get to this place. My church family, and God and my relationship with him, which I am so lucky to have.”

Scott has been a three-sport standout at Fort Dale participating on the cheerleading squad, basketball team and tennis team.

“I also want to thank Fort Dale Academy for giving me the opportunity to play so many sports that I have loved and made so many memories through,” Scott said. “… It has been such an overwhelming journey that will forever be a part of making me who I am today.”

As a cheerleader she earned UCA All-American honors as a freshman and served as captain her senior year.

On the basketball court, Scott has been named Most Outstanding Rebounder, received the Coaches Award, Most Valuable Player Award and been named to the AISA All-Star team.

“Ashton has been an excellent example of a true student-athlete,” Fort Dale basketball coach Reggie Mantooth said. “Her leadership, work ethic and attitude have helped make her successful in both athletics and academics.”

Pickens finalist for Teacher of the Year