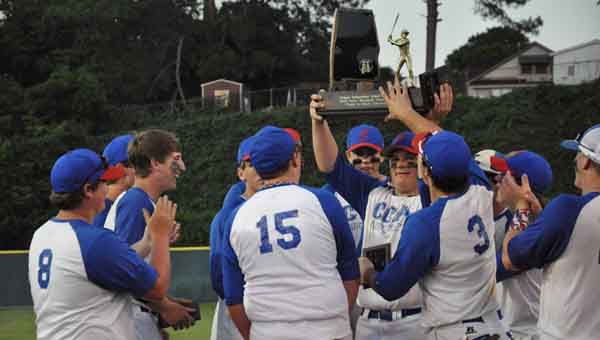 Head coach Jerry Folmar said this year marked CCA’s first championship in baseball. The team has made it as far as the playoffs, but never took the grand prize.

“I told them all they had to do was work and listen and they did it,” Folmar said. “I couldn’t ask for more.”

Game 1 got off to a slow start, going scoreless until the sixth of seven innings. With two outs, Hunter Weeks hit a double and earned CCA’s first RBI of the best-of-three series.

Weeks, a senior, said he enjoyed the experience.

“It felt amazing,” he said.

Clayton Hester was next at bat, hitting a single that slipped past the Lowndes third baseman and earning an RBI.

Senior Dalton Weeks pitched all seven innings. He had five strikeouts and three hits in the game and caught a pop fly in the bottom of the fourth inning.

Crenshaw ended the game with seven hits and one error.

“I tried to maintain my composure and I had a good defense behind me,” he said after the game.

Lowndes Academy had trouble finding a pitcher to hold the Cougars. Three players shared the mound.

The Cougars started stacking points with a two-out rally in the bottom of the second inning. LA pitcher Brian Rayburn walked Colin Holloway and Hunter Weeks bunted for a QAB. He was out at first, but got Holloway to third and Britt Kelley to second base.

Brandon White hit a double to left field and earned an RBI. Nate Scoggins followed with a triple, stealing third as Lowndes failed to throw White out at home.

Rayburn gave up the mound to Ford Rosser, who walked Kelley. The inning ended with Kelley still on base as Dalton Weeks popped a foul ball caught by Rebel John Franklin.

The top of the third came and went with the first two hitters (Brandon Reid and Michael Scribner) thrown out at first and Wade Howard’s fly caught at second base by Brandon White.

At the bottom of the third, Kyler Weeks hit a single and freshman Ben Archie ran for the pitcher. While Holloway was at bat, Archie stole second. An error on the throw gave him chance for third, which he speedily took. Holloway walked and later stole second.

After a single, a walk and two balls on the third hitter up, Lowndes Academy’s Rosser traded places with catcher David Hussey in the bottom of the third.

Hussey struck out the next three pitchers, but not before Archie and Holloway could steal home on pitches that got past Rosser. The inning ended with a 5-0 score.

The Cougars continued their climb in the bottom of the fifth inning. Dalton Weeks hit a single to left field, after his third-base coach told him the team needed a runner on base, not a hero ripping at every ball that crossed the plate.

White’s single to third base brought Holloway home. A ninth run brought the Cougars within one point of the championship. Nate Scoggins tried to steal home for the win, but Rosser tagged him for the third out and a last Rebel chance at bat.

The Rebels were not able to make anything happen at the top of the sixth inning. Hussey was not ready to give up. He struck out Cole Little, who was first at bat.

Holloway stepped up to the plate with redemption on his mind.

“In the first game, I struck out three straight times. But, I knew I hit better off faster pitchers,” he said after the game. “I knew we needed that last run and knew he (Hussey) was going to give me something fat and I went after it.”

Holloway’s fly ball to left field was all the Cougars needed to drive home the final run and clench the championship.

Folmar credited his staff of assistant coaches: Aaron Holloway, Scott Scoggins, Steve Jacobs and Mike Archie, for their efforts this season. The assistant coaches really had to step up during the first half of the season when Folmar was sick for several weeks and hospitalized for a short stint.

“We had great assistant coaches. I’m very fortunate,” he said.

“Hussey’s been one of our big players this year,” said LA head coach Shane Moye.

“I’m so proud of all of them,” Folmar said. “And we’ve got some good boys coming up next year. We’re basically a young team. We started two freshmen, Ben Archie and Clayton Hester.”

For the second time in three years, the Rebels came up short in the championship game. Moye said he too had a young team and looked forward to another shot at Crenshaw next year.

“We’re really young,” Moye said. “We feel like we overachieved just getting here. Crenshaw Christian is a good team. I feel like the better team won.”

Hale named pitcher of the year

CONTRIBUTED PHOTOUniversity of Mobile pitcher Corey Hale was named SSAC Pitcher of the Year. He is a graduate of Luverne... read more