Ravens take Greenville native in fourth round of NFL Draft 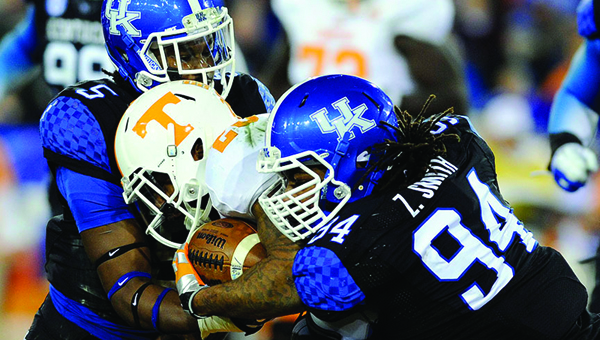 Former Greenville High School standout Za’Darius Smith (94) was drafted with the 122nd overall pick by the Baltimore Ravens in the 2015 NFL Draft. (Photo Courtesy of the University of Kentucky)

Smith, who played the last two seasons for the University of Kentucky, was chosen by the Baltimore Ravens in the fourth round of the 2015 National Football League Draft on Saturday afternoon in Chicago.

Smith said waiting on the call was at times frustrating.

“I just got aggravated because I didn’t get the phone call when I thought I was going to get it,” he said. “I had one phone outside by the TV, and I went inside and I started to lie down and just continue to watch the draft in the living room.  My mom ran in the house saying ‘somebody’s calling you from a weird number,’ and I tried to answer it and they hung up and called my other number.  I answered it and the head coach said ‘Zadarius, you ready to be a Baltimore Raven?’ Getting that call felt like being at the top of a roller coaster and you know it’s about to drop, and your heart just drops.  As soon as the roller coaster dropped, everything came back to normal.”

Waiting on the call wasn’t only difficult for the former Kentucky standout. It was just as hard for his mother, Sharon Smith.

“We’ve been a nervous wreck for the past couple of weeks,” she said.  “When we got the phone call, it was like a burden released.  We were all released of a lot of stress.  It was just an amazing feeling.”

The Greenville native will likely transition from defensive end, which he played at Kentucky, to outside linebacker. He may also see action as an interior rusher from time to time, similar to how Baltimore used Pernell McPhee in recent years. McPhee signed a free agent deal with Chicago in March.

“I think I’ll be a good fit,” Smith said. “The coaching staff really wants me to come in for Pernell. He was a great defensive end/outside linebacker guy, and that’s who they see me as.  They just like my pass-rush ability.  They want me to set the edge on third downs and keep me inside and rush the passer between the guard the center.  They see me as a great fit and I see myself as a great fit for the Baltimore Ravens.”

Smith said he’s not concerned about transitioning from defensive end to linebacker.

“(The Ravens are) one of the best defensive teams in the NFL, and for them to put me in the situation to come right in and play right away helps a lot and gives me more confidence for myself throughout this upcoming mini-camp. “

Sharon Smith said she plans to be at as many Ravens’ games as she can.

“I’m going to support him all the way to Baltimore. I’m going to be right there, and I’m still going to be his No. 1 fan,” she said. “I’ve got to go and support my baby.  I’ve been there since middle school when I used to follow him to the basketball games and then that last year of high school with football. And then I followed him to Kentucky, and now I’m a Baltimore Ravens mom.

A former junior-college star, Smith was head coach Mark Stoops’ first Kentucky signee in December of 2012, and started all 24 games in the 2013 and 2014 seasons. He totaled 120 tackles over the two campaigns and his 14 tackles for loss featured 10.5 quarterback sacks.

As a senior, Smith made 61 tackles, with 7.5 tackles for loss and 4.5 sacks, adding four quarterback hurries, two pass breakups and a fumble recovery. He had a career-high 11 tackles at Florida, adding a sack and a pass breakup. He also notched eight tackles against No. 1 ranked Mississippi State, with 2.5 TFL and a sack.

Smith totaled 59 tackles as a junior, and his 6.5 tackles for loss included six quarterback sacks. He also had six QB hurries. He had a season-high nine tackles at Georgia and his career-best three sacks came against Miami (Ohio).

Smith came to UK from East Mississippi Community College, where he made 47 tackles, including 11 tackles for loss and six sacks in his sophomore year. He was named second-team All-America by the National Junior College Athletic Association. As a freshman, he made 19 tackles, with seven total TFL and 4.5 sacks, as East Mississippi posted a 12-0 record and won the 2011 NJCAA national championship.

Smith was a relative latecomer to the game. A basketball player at Greenville High School, he didn’t begin playing football until his senior year at GHS.

Smith comes from an athletic family. An older brother, Bob Meeks, played center at Auburn and for the NFL’s Denver Broncos. A cousin, Davern Williams, played at Troy and for the NFL’s New York Giants. Smith also has a niece, Kristi Mokube, who played basketball at Florida State.