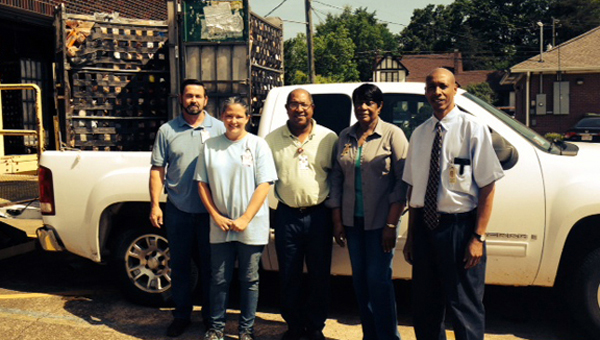 Local letter carriers are helping stamp out hunger. As part of the 22nd Stamp Out Hunger campaign, letter carries in the Camellia City and across the nation collected non-perishable food items left by mailboxs along their routes. The food was then donated to local food banks, such as St. Thomas Episcopal Church’s food pantry. This year’s Stamp Out Hunger campaign is set for Saturday. Pictured in front of a load of food that was donated to the local food pantry are, from left to right, Faron Mason, rural carrier; Angie McBride, rural carrier; John Langham, postmaster; Minnie Ball, rural carrier; and Larry Managan, clerk. (File Photo)

Mail carriers usually deliver and pick up packages, but they will pick up special deliveries this weekend to help those in need.

Greenville’s postal service will join postal services across the nation in conducting the 23rd annual Letter Carrier’s Food Drive on Saturday. Customers are asked to place a sturdy bag of non-perishable food items next to their mailboxes or in their mailboxes. The food collected locally will be donated to the Selma Area Food Bank. The National Association of Letter Carriers and the United States Postal Service will sponsor the food drive.

Nationally, a whopping total of about 70 million pounds of food items was collected last year.

Hundreds are expected to pound the pavement — or at least the ground — Friday night at the Relay for... read more