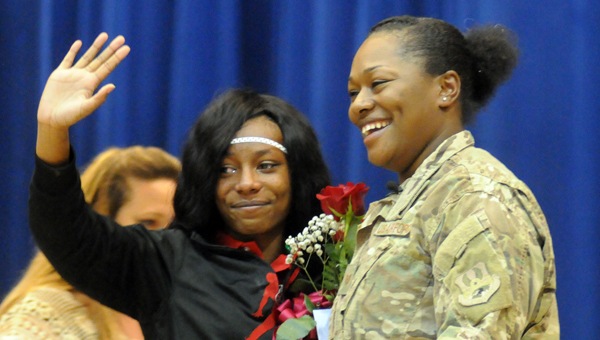 Lexis McMeans waves to the audience at the Georgaiana talent show after being surprised by her mother, U.S. Air Force Tech Sgt. Tonya Gandy, who just returned from a deployment to Afghanistan. (Advocate Staff/Andy Brown)

On Friday, the audience at Georgiana School’s annual talent show was treated to an appearing act.

Gandy had been serving for the past six months in Afghanistan.

When McMeans saw Gandy for the first time she leaped into her mother’s arms.

It was the moment Gandy had been waiting for since she arrived back in the United States on Thursday from her seventh deployment.

“I didn’t get any sleep (after arriving in the U.S.) because I was ready to get here,” she said.

McMeans was left nearly speechless by the surprise, but she knows exactly what the first thing she wants to do with her mother is.

That suits Gandy just fine. She’s just happy to be on the same side of the globe as her daughter.