LHS advances to second round action 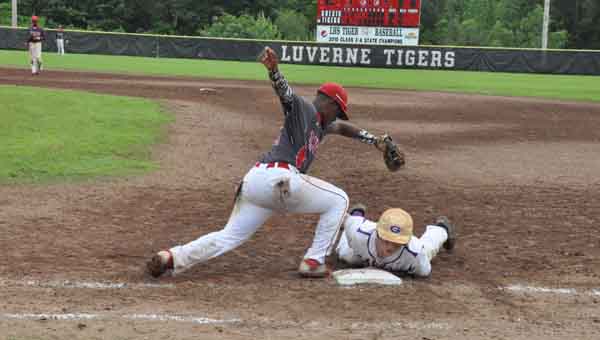 The Luverne Tigers advanced to the next round of the playoffs after 11-1 and 11-4 wins in a doubleheader against the Goshen Eagles Saturday.

In Game 1, the Tigers made quick work of the Eagles, ending the game in four and a half innings with the 10-run rule.

“I think we played well the first game,” said Luverne head coach Andre Parks. “We were able to pitch well, hit the ball well, do well at every phase of the game.”

Parks saw a lull come over his team during the second game.

“We got ahead and relaxed,” he said. “That’s something we’ve been struggling with all year.”

Luverne took an early lead, scoring three points in each of the first two innings and bringing the score to 7-1 by the end of the third.

The Eagles shut out the Tigers for the next three innings and picked up an additional three runs.

The Tigers snapped out of the lull in the final inning, adding another four runs to the score. Coaches reminded players that a similar lull lost them a game to Highland Home the previous week and seniors pumped teammates up at the top of the inning.

The Tigers sent one player to the emergency room during Game 1. A ball hit second baseman John Austin Motes in the face as he attempted to bunt. He returned before the game ended and played in Game 2 without incident.

A sprained shoulder limited right-fielder Austin Bryant to running for catcher Uriah Brown. Parks said he kept Bryant out of the outfield as a precaution. Bryant is expected to be back full-strength as the Tigers host New Brockton for round two of the playoffs today.

Luverne split a doubleheader with New Brockton in the first round of last year’s playoffs. Parks predicted a challenging game Friday. This is the first time in New Brockton’s history the team has made it to the second round of the playoffs.

“They are a well-coached, scrappy team,” he said.

The Tigers will have one advantage.

New Brockton’s prom is Friday night. The big night may be enough to distract players and may even take priority over a win.

LETTER: Community is owed an explanation

To the Editor: As a lifelong resident of Highland Home who has volunteered countless hours over the years, I can’t... read more