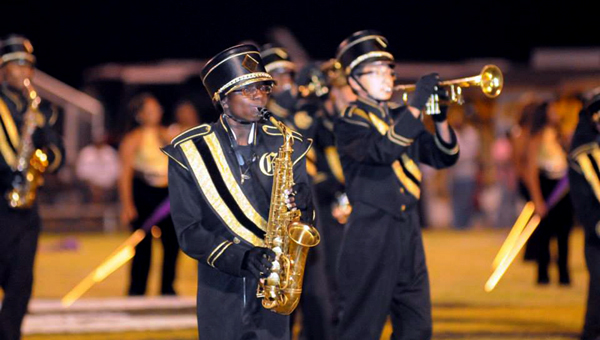 The Greenville High School Tiger Pride Marching Band is obviously no stranger to performing on the field.

But on April 29, the band will trade the gridiron for the baseball diamond as it performs the National Anthem at Riverwalk Stadium as part of the Montgomery Biscuits’ Grand Slam School Day.

“This is a very special opportunity for our band program, and as far as I know, we have never performed at a minor league baseball stadium before,” said GHS band director Brett Johnson. “We are extremely looking forward to it. Performing for that many people is a wonderful thing. Having this opportunity shows off some of the wonderful things that are happening with Butler County Schools to the surrounding areas.”

Grand Slam School Days is a promotion devoted to teachers and students. The team provides classroom teaching materials, and also stages on-field activities, to create a day of learning while students enjoy time at the ballpark.

According to the Montgomery Biscuits, in 2014, more than 12,000 children in central Alabama attended the Grand Slam School Days.

Johnson is hoping that the opportunity to perform at the park will help grow the GHS band.

“Not only is it showing us off to others, but it makes us more appealing for future students that might want to join the band program,” he said. “Hopefully by doing big things like this he can help recruit members into the band program.”

He said there’s already been plenty of talk around the school about the band’s selection to take part in the event.

“When we found out Monday I immediately told our principal, Joseph Dean, and superintendent, Amy Bryan, about this wonderful opportunity,” he said. “They were ecstatic about the good news and there has been a buzz around school about it.”