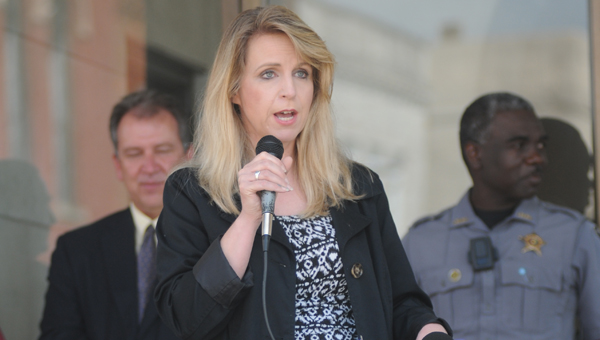 Butler County child advocates kicked off National Child Abuse Prevention and Neglect Awareness Month on Tuesday by planting a pinwheel garden on the front steps of the Butler County Courthouse.

The pinwheels symbolically represent the happy, carefree childhood that those gathered wish for every child in Butler County.

Chief Lonzo Ingram, who has been at the helm of the Greenville Police Department for three decades, said child abuse cases are an all-too-common occurrence.

“If you do this job for any length of time, you will a child who has been abused, and you’ll see a child who has died as a result of abuse,” he said. “So many times those children that have been abused end up becoming abusers themselves. That’s a tragedy.”

Ingram said that he believes the collapse of the family unit is to blame for the majority of child abuse cases.

“It all boils down to an absence of love,” he said. “If we repair the family unit, we will be better off.”

“By uniting like we have for the last few years we have made a difference,” Nimmer said. “Our work is not done yet.”

Assistant District Attorney Steve Townes encouraged community members to join in the fight against child abuse and neglect by partnering with the Butler County Children’s Advocacy Center, which works with law enforcement, the judicial system and the Department of Human Resources in Butler, Lowndes and Crenshaw counties to assist children who have been victims of crime or who have witnessed a crime.

“I’d encourage everyone to donate to (the Butler County Children’s Advocacy Center),” he said. “Take part in their fundraisers or donate time as a volunteer.”

The Hank Williams International Fan Club was started in October of 1992 to pay tribute to Butler County native and... read more