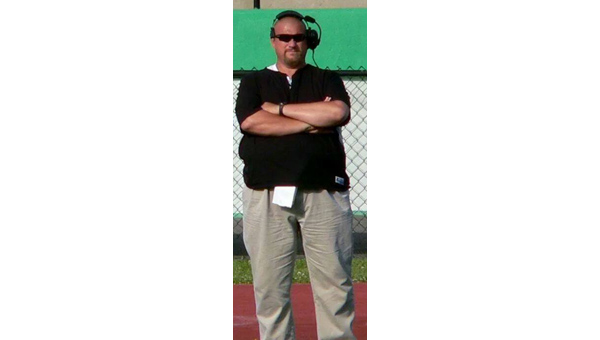 Gregg Baker has been hired as head coach of the Highland Home Flying Squadron.
CONTRIBUTED PHOTO

Baker will start Tuesday and work Wednesday, before starting his first full week with the Flying Squadron April 13.

“I’m excited,” he said. “I’ve always wanted to be in a small town. We’ve got some work to do, I know, but I really look forward to it.”

Baker plans to meet with coaches and plan spring practices next week.

“My plans for the spring is to come in, get the weight program up and running and see what kind of talent we have. Then we can start to implement a defensive strategy,” he said.

Baker has coached at every level, from middle school to Faulkner University.

“Football is football. You just have a different age groups,” he said. “I personally enjoy high school because there is not near as much traveling and recruiting. My job is to prepare athletes to play at the next level.”

He coached at Montgomery Catholic Prep for the last two seasons and was head coach of Faulkner University from 2009 to 2011. His career includes a head coach stint at Alabama Christian and assistant coaching at Charles Henderson, Prattville, Trinity and Jeff Davis.

“We’re just proud to get him,” said Superintendent Terry Holley. “He lives in South Montgomery and has family in Highland Home. His aunt retired from Highland Home School three or four years ago.”

Baker’s aunt, Debe Armstrong, taught at Brantley and Highland Home, retiring with more than 30 years with the school system.

Holley introduced Baker to the school’s staff after the board meeting.

Baker said spring practice would include inner-squad scrimmages and he may arrange a game with a local school.

“No decisions have been made yet,” he added.

Crenshaw County roads will get some TLC as volunteers participate in the “Don’t Drop it on Alabama” spring cleanup campaign.... read more