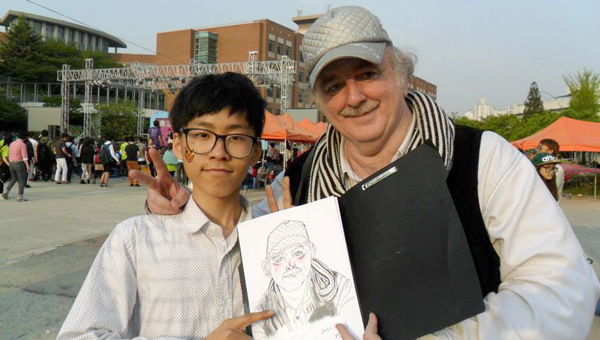 When educator Frank Burkett left Butler County decades ago with dreams of traveling the world, he left behind a hometown that talked about one thing and one thing only — football.

As it turns out, not much has changed.

“When I left, all I heard was Alabama football and Auburn football,” Burkett said. “When I came back, I still hear it.”

That’s about the only thing that hasn’t changed since Burkett left for Asia more than 20 years ago.

In that time, he garnered 13 years of teaching experience in five countries — Micronesia, Saudi Arabia, South Korea, Malaysia and Taiwan.

It was television, of all things, that served as the gateway drug to expanding his horizons.

Burkett has done that and then some in the two decades that followed, culminating in a role as a professor at Pyeongtaek University in South Korea.

It was a dream that took him several years to realize; Burkett worked his way through school at LBW in Greenville, paying for it all with borrowed money and a stint at L.V. Stabler Memorial Hospital.

Burkett’s experiences abroad were much more authentic than those of a typical tourist, but being ingrained in foreign cultures meant seeing the bad as well as the good.

The sadder side of life abroad was most apparent during his time spent in South Korea, where Burkett said he witnessed a culture full of young people suffering from a fear of being alone.

According to World Health Organization data, South Korea has the sixth-highest suicide rate in the world. A number of social, economic and educational factors are to blame, including the pressure for students to do well in school, unemployment and more.

“On the subways in Seoul, they have barriers up because too many people were jumping in front of the train,” Burkett said.

Other types of barriers existed within South Korea, and the biggest one of all was also perhaps the most difficult to see.

According to Burkett, the phenomenon of an always-connected culture has made people of all cultures and backgrounds both more together and more alone than ever before.

“Everything is wired. I’ve seen girls texting so much that they would just run into a wall,” Burkett continued.

Burkett has since traded the lively hustle and bustle of densely-populated South Korean streets for the nighttime sounds of crickets, coyotes and — just as often — nothing at all.

Being back home in Butler County for the past year has been a difficult adjustment, but one well worth the effort due to the lessons he’s learned abroad.

“One thing you can’t do is judge,” Burkett said. “Korea is so crowded, and a sauna is a place you can go that’s private. It’s like a coffee shop; you pay not for the coffee, but to sit and talk privately. Here, you would take your son to the barbershop or hunting. But there, it’s to the sauna. I like the openness of what they have.

“Over there, you need them and they need you in some way. Here, you don’t really need someone because we have a lot. We don’t need food, we don’t need directions; there, you do. And the friendships that you develop are so much stronger.”

errance Marsh has been arrested and charged with murder following the fatal shooting of Jermone Watkins. Officers with the Greenville... read more