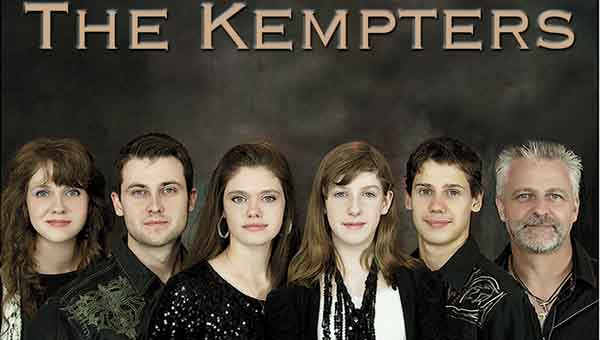 The Kempters gospel band’s show is for the dogs. At least, it will be Saturday night.

The family of musicians agreed to come to Luverne to raise money for the Crenshaw County Animal Society.

Volunteer Kathy Dowdy helped organize the event after hearing the band would be in the area for a Sunday concert at Goshen Baptist Church. Band members agreed to come a day early and stay at her Camellia Inn. The family will split proceeds from the $15 tickets with the nonprofit animal rescue group.

The Kempters are comprised of Chaz Kempter and his five children, who range in age from 11 to 24. They have ministered in music as a family since 2007.

Dowdy has been a fan of the group since she first saw them perform about six years ago.

“They’re adorable,” she said. “And they all play instruments like mandolins, keyboards, guitars and drums. They’re talented and smart. They just ooze intelligence in music.”

She said to expect to hear anything from bluegrass to Beethoven when the Kempters hit the stage. Anything is possible.

“And the girls will bring silver jewelry they make to sell after the show,” she added.

Dowdy said the concert is the first in a series of fundraisers CCAS is planning. Up to now, the animal society had focused on fundraisers like selling chili and taking photos at events. With the expenses involved in rescuing animals and educating the public, Dowdy said it was time to start thinking bigger.

“We’re not trying to compete with the other group [Crenshaw Animal Rescue Project]. We’re just trying to help,” Dowdy said. “And the winners are the animals.”

Jamie Stiffler and Daryl Crowe will wed in April. Kevin and Denise Stiffler, of Pittsburgh, Penn., announce the engagement and... read more