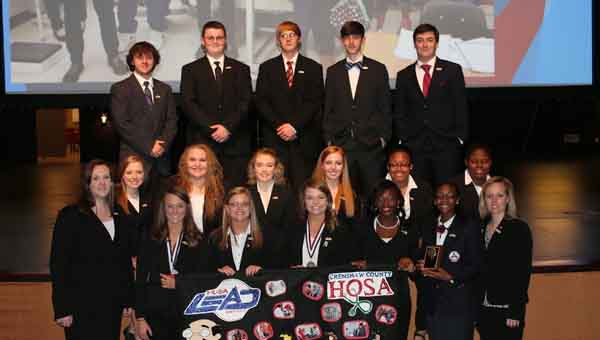 The students competed in a variety of events such as HOSA bowl, career health display, health education, Outstanding HOSA chapter and Pharmacology.

The students were able to hear a motivational speaker and network with more than 1,200 students registered for the state HOSA conference.

Club members brought home several awards. The HOSA club was awarded a $100 cash prize and first place in the ”Healthy Vitals” State Project for submitting an explanation of a booth project the students conducted at local Kidcheck health screenings as a way to help in making this community healthier.

Kaitlin Galloway was elected to be a HOSA State Officer, which is a very prestigious position. She will be representing Alabama’s HOSA at several events throughout the state and nation in the upcoming year.

Abbi Sanders and Haeden Helms placed second for their project displaying the career of a NICU Nurse.

Bailey Wilson submitted a scrapbook, where the club was recognized as an Outstanding HOSA Chapter. These students are eligible to compete at the national level in June in Anaheim, California! The banner in the picture supports this year’s HOSA theme…”HOSA: Lead!”