New bill to allow for creation of charter schools 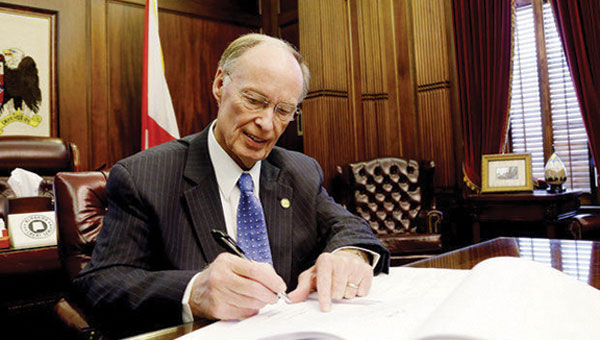 Gov. Robert Bentley signs a bill to allow charter schools in Alabama. Prior to the bill being signed into law, Alabama was one of eight states that did not allow public charter schools.

Gov. Robert Bentley signed a bill into law Thursday allowing for the creation of charter schools in the state.

The Alabama House of Representatives approved the bill Wednesday with a 58-41 vote, and the Senate voted 24-11 to go along with House changes.

Alabama was one of eight states that did not allow public charter schools.

“I want to thank all those who were involved in the process of passing this legislation including the Alabama Coalition for Public Charter Schools, the Black Alliance for Educational Options, and Students First,” said Sen. Del Marsh, who sponsored the bill in the Senate. “I am glad we were able to bring so many to the table and give Alabama parents the best educational options possible.”

“My first concern is about funding leaving public schools to go to charters,” she said. “Since Alabama already isn’t fully funding public education, how can taking more money away to give to non-proven charter schools create success in either place?  It doesn’t add up.”

Charter schools are schools that receive public money but are not subject to some of the rules, regulations, and statutes that apply to other public schools. Private groups who desire to set up a charter school must first apply to the state board of education in order to operate, and the school must continue to meet certain academic benchmarks in order to continue to receive funding.

The bill would allow for existing public schools that wish to operate as a charter schools to be converted.

Because charter schools are part of the public school system, they cannot charge tuition.

Bryan is not in favor of charter schools because she doesn’t believe they have proven to be effective in other states where they have been implemented.

“Charter Schools do not have a proven track record of success in other states,” she said. “Often they aren’t required to have certified teachers or comprehensive curricula or testing of students to prove their achievement. Less accountability means they aren’t held to the same rules, quality, and limitations as public schools. If taking those away makes better schools, then take those away from public education —but to be clear, I don’t believe accountability is a bad thing.”

Many supporters of charter schools say they offer more options to parents in regard to their children’s education.

“Every child in Alabama deserves a high quality education, and the School Choice and Student Opportunity Act empowers parents with another choice for their child’s education,” said Rep. Terri Collins, who sponsored the bill in the House. “It is time for Alabama to join the other 42 states that provide this innovative option to educators, parents, and students.”

Bryan said Butler County already has a number of options.

“We are lucky in Butler County because we already have choices,” she said. “Besides the obvious choice of public vs. private education or even home or church schooling, our public schools have tons of choices for students,” she said.

“I believe the charter schools will locate in our more urban Alabama cities where they can recruit lots of students from large urban schools without worries of transportation, special needs services, other expensive supports systems, and strong community ties,” she said. “Charters may thrive in places where there is little school pride, little student success, and little community support. We have success, pride, and support in Butler County, but now we will have even less money to educate our students due to the charters taking their cut.”

Officials with the Alabama Coalition for Public Charter Schools, which lobbied for the bill, said the earliest a charter school would be able to be created would likely be the fall of 2016.