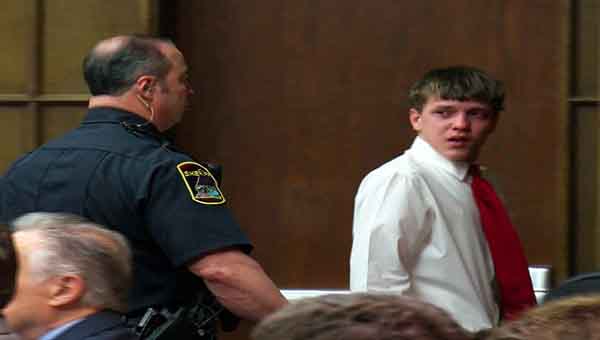 A Tennessee teenager suspected of triple murder is back behind bars after a high-speed chase in Crenshaw County.

Sixteen-year-old Jacob Allison was out on a $525,000 bond for a Chattanooga triple murder. That bond was revoked Monday morning, following last week’s incident at a Brantley driver’s license checkpoint manned by Alabama State Troopers and Crenshaw County deputies.

Allison was stopped at a checkpoint in Brantley at around 3:45 a.m. as he and two passengers traveled through Crenshaw County Monday, March 16. They were heading north from a weekend at the beach.

When asked by Dep. Ralph Wilkerson to see his license, Allison told the deputy he had to pull over and get out of the 1990 red Toyota Camry to reach his wallet.

Instead of pulling over, Allison sped away.

“He took off so fast he almost struck Deputy Lee Simmons, who was speaking to a motorist in front of him,” said Crenshaw County Sheriff Mickey Powell. “If Dep. Simmons had not been paying close attention, he could’ve easily been hurt or killed. Allison had no intention of stopping.”

When notified about the chase, Powell took into consideration the time and limited traffic and gave deputies permission to chase Allison.

Wilkerson chased Allison into Luverne where a Luverne police officer attempted to stop the driver with a rolling barricade. The officer got in front of the vehicle and reduced his speed, but Allison passed him.

Powell notified the Montgomery Sheriff’s Office, asking for a roadblock.

The chase ended in south Montgomery County, where a deputy roadblock ran Allison off the road.

The third passenger was charged with possession of marijuana after admitting the drugs found in the car’s console belonged to him.

Allison was released from Crenshaw County Jail on a $3,000 bond last week. He returned to Chattanooga, where Tennessee Criminal Court Judge Barry Steelman revoked his original $525,000 bond for the April 2014 murders. Allison will be held at the Silverdale Workhouse until trial. He is being tried as an adult.

Seventh- and eighth-grade students from Luverne and Banks School practiced for state tests at the Aspire to Greatness event Wednesday... read more