Ingram reflects on 30 years as chief 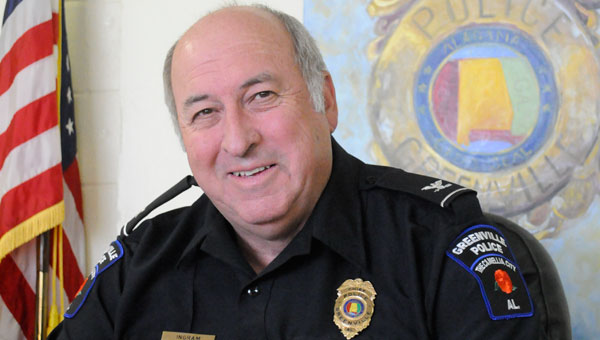 Though it’s difficult for most to imagine the Camellia City without Ingram, in those days, hardly anyone knew him.

“I didn’t start my career here; I came from Daleville, and prior to that, I was a captain with the Ozark Police Department,” Ingram said.

“It wasn’t so much that I was nervous—I just didn’t know anybody. You have to figure out where the bathrooms are and that sort of thing.”

Though the bathrooms are in an entirely different place from his starting space upstairs in City Hall, the office window view isn’t the only thing that has changed for Ingram in his 30 years of service.

“They’re different from the standpoint that in the 1980s, I think we had more crime back then in Greenville,” Ingram said.

The department’s resources are also a far cry from their humble beginnings in the 80s.

Long gone are the days of an entire force sharing five squad cars—each having accrued more than 200,000 miles. The department has saved a substantial amount in maintenance costs alone, due to the investment in a new fleet and the adoption of the One Man, One Car plan.  But the upgrade has a less tangible benefit, as well.

“There’s also the ability that an officer has in saying ‘this is my car,’” Ingram added.  “A great deal of pride goes with that.”

But more importantly, long gone are the days of rampant crime of the 1980s.  Ingram said he and the force experienced a wave of crime throughout the decade that eventually culminated in a single year featuring nine murders—an all-time high during his tenure as chief.

But along with the spree of incidences come a countless number of war stories.

“I remember there were the Brunson brothers, who’d escaped from federal prison. They came through Greenville and they were bank robbers,” Ingram said.

“They’d been to a little bar here and had gotten liquored up.  They were going back and they ran their truck off the road across from the Hampton Inn. It was a stolen truck, of course.  Two fire marshals were coming back after interviewing someone about a fire and saw them, and stopped to help.  They called us, and one of our cars came out there.

“When our guys noticed that the VIN (vehicle identification number) had been filed off, they started shooting right there. One of the brothers was shot six times, and didn’t die.  The other got away and we had a 36-hour manhunt for him.  That was some heady stuff.”

Not all of Ingram’s stories were tales of harrowing danger.  Some were just as unbelievable, but for entirely different reasons.

“Years ago, we had a situation where an emu was over on the south side of town, so we go over to try to catch it.  We’ve never had experience with an emu… so we ended up with three police officers in the emergency room.

“He cut them up, beat them up and just about tore their uniforms off of them.  It was hilarious.  We finally did catch him and got his feet tied, and he kept trying to get lose and literally cut his own throat and died. The mayor at the time finally asked why didn’t we just shoot him, and I said we couldn’t shoot Big Bird over there in front of all of those children.”

Though the department wasn’t able to help the emu, Ingram added that the best aspect of the job was his ability to help people. That help comes in various forms, and not all of the problems they solved required force.

“Shortly after I got here, we started a community service deal so that young kids could do community service if they got a ticket instead of their parents paying the ticket,” Ingram said. “That way, it didn’t go on their driving record and insurance.  We were able to help a lot of young people over these 30 years.”

Another project involved Ingram and Greenville mayor Dexter McLendon aiding ex-felons in getting reintegrated into society by helping them get a job.

“That’s a deal where people just don’t want to hire a felon,” Ingram said. “But he needs a job.  Everybody that wants to work needs a job.”

Ingram said that retirement has crossed his mind once or twice, though he plans to stay around for a few more years. He insists that there is work to be done, regardless of the progress the department has made in the past 30 years.

Fortunately, Ingram has left a legacy that will ensure that his vision comes to fruition long after he’s gone.

“I’m not trying to downplay any past officers who’ve been here, but right now at this point in time, this is probably the best police department we’ve ever had. We’ve got a good group of dedicated people who do a good job on a continuing basis, and they work to do a good job for the citizens.”