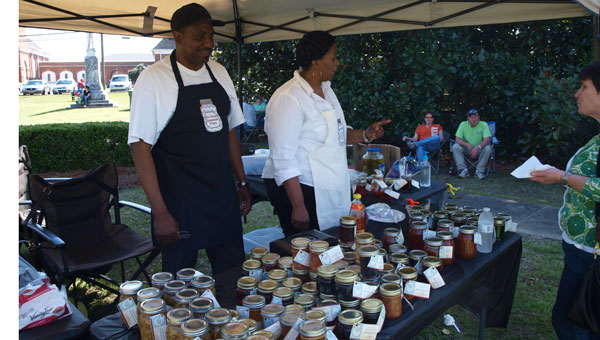 The inaugural Camellia City Fest had arrived and brought near-perfect weather with it for the downtown festival.

“Isn’t this great? I couldn’t have asked for anything nicer for this event,” enthused the chamber director Saturday afternoon.

With a portion of Commerce Street blocked off for the day, festival goers could listen to live music and safely browse among the handicrafts, jewelry, toys, accessories and more filling the booths lining the center of the street.

The Greenville YMCA reports it sold more than 300 hot dogs to attendees during the course of the day.

Almost 50 food and merchandise vendors participated in the festival, with a number of additional vendors asking to be put on the mailing list for next year, said GACOC executive assistant Lacey Eason.

“We talked to a lot of people there to get suggestions for next year. We want to grow it—and at the same time, make it more compact,” Eason said.

Barbara Gentry of Douglasville, Georgia and Bonnie Palmer of Evergreen, who manned the “Isom Purses” tent, said they were impressed with CCF’s first festival.

“I think things went well and that it was extremely well organized,” said Gentry. “I would suggest they consider using smaller tents and putting them closer together next year.”

Gentry and Palmer agreed CCF had plenty of potential.

“Just get the word out to folks like us and you’ll have plenty of vendors,” Palmer said.